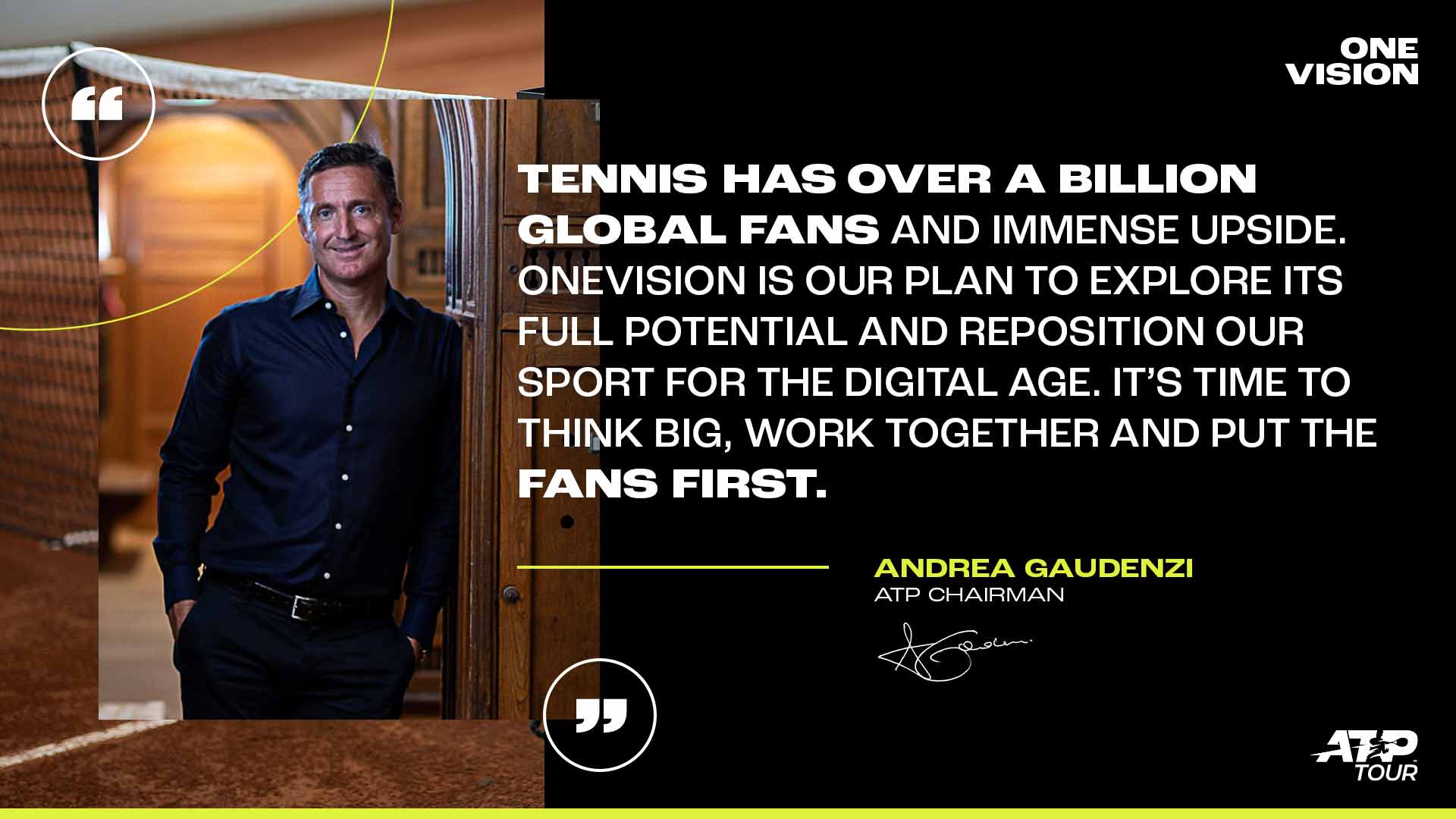 The ATP has announced the approval of the first phase of “OneVision”, a long-term strategic transformation plan designed to take tennis to new heights from 2023.

With over a billion tennis fans worldwide, an emerging generation of superstar players and a content offering perfectly suited for the digital age, OneVision is laying a solid foundation for the sport’s future growth.

In development by ATP management since 2020, the ambitious plan introduces a groundbreaking set of reforms across the ATP Tour, reducing fragmentation, aligning interests between players and tournaments and repositioning tennis in an entertainment landscape of increasingly competitive. OneVision is comprised of two independent phases and is built around three core principles: fostering unity, enhancing the fan experience, and leveraging scalable growth opportunities in media, data, content and technology.

Andrea Gaudenzi, President of the ATP, said: “Our sport has enormous advantages and stands at the dawn of a new era of growth. To realize our potential, we must be united, seek new opportunities for growth and focus on what matters most: the fans. OneVision gives us a game plan to achieve this. Its launch represents a defining moment for the Tour and a huge collective effort in our sport. I’m incredibly excited for what’s to come.

The approval of the first phase by the ATP Board of Directors marks an important milestone for the ATP Tour. This follows more than two years of extensive consultations with the ATP Board of Directors, Player and Tournament Councils and the ATP Advisory Council comprised of experts from the media and sports industry. technology. Coming into play from January 2023, it introduces major reforms and game-changing benefits.

For the first time in ATP Tour history, audited tournament financial data will provide players with full transparency into the tournament economy. At the same time, a revolutionary 50/50 profit-sharing formula will align the interests of players and tournaments in the growth of the game as partners in success.

With the expansion of multiple ATP Masters 1000 events, the Tour will provide more premium action for fans throughout the season and more earning opportunities for players. Five additional high-profile tournaments will grow from eight-day (56 Draw) to 12-day (96 Draw) events over the coming seasons, in line with the BNP Paribas Open in Indian Wells and the Miami Open presented by Itau :

This expansion is in turn expected to deliver an immediate upgrade to the Masters 1000 level, with the five expanded high-level event prize money increasing by more than 35% between 2022 and 2025. The year-end bonus pool is expected to nearly double to short term and will now be distributed to the top 30 players (instead of 12). Additionally, a brand new profit-sharing feature based on tournament financial performance has the potential to provide additional financial support to over 140 players.

Also from 2023, new Tournament Category Agreements for the ATP Masters 1000 and ATP 500 tournaments will come into effect to ensure the long-term stability of the Tour and enable major investment in the sport, while raising all standards of events for players, media and fans.

The aggregation of the tournament’s media rights in ATP Media, the sales, production and distribution arm of the ATP, and the recent Tennis Data Innovations, an entity entirely dedicated to the professional exploitation of data, will allow the Tour d ‘provide an enhanced integrated experience for fans around the world. Importantly, it will unlock major growth opportunities in media and data, two highly scalable revenue streams. Embracing digital transformation will also move the Tour away from an overreliance on ticketing, a concerted move seen in many other major sports.

Finally, OneVision will usher in a new era of corporate governance and professional decision-making, with an expanded and restructured composition of the ATP Board of Directors, as well as new checks and balances to protect against conflicts of interest.

OneVision phase two development is currently underway, with the vision to create a unified governance structure and operating model across the sport, leveraging key synergies and providing better support to the lower levels of tennis. through gradual growth.

The development of phase two remains a collective effort between the tennis authorities, the ATP, the WTA, the ITF, the Australian Open, Roland-Garros, Wimbledon and the US Open. The recent collaboration has yielded encouraging results, including the announcement of a joint Netflix series, a collective response to the global pandemic, greater consistency and alignment between rules and format, and fundraising initiatives. coordinated funds. The resounding endorsement of leading industry experts, alongside the challenges of decision-making on complex issues due to the current fragmentation, has further highlighted the major opportunity that lies in bringing the sport closer together.

Discover the details and advantages of OneVision