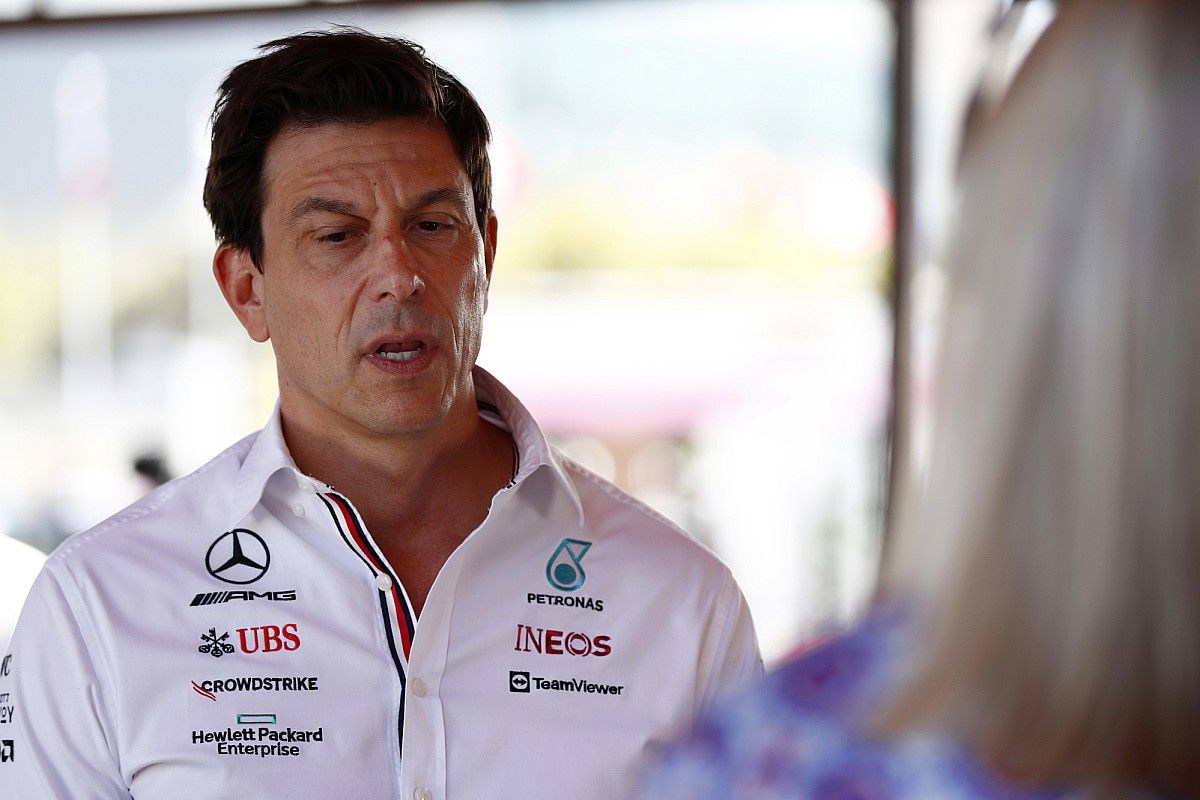 Following the intervention of the FIA ​​to address safety concerns expressed by the drivers, Mercedes found themselves at the center of intense debate in the paddock.

After racing with a stay on the second floor as permitted by the FIA’s pre-event technical guideline, rival teams wondered if the team had been informed of the changes in advance to have the changes ready in time – which Mercedes insisted was not the case.

Then there were allegations that the stay was in fact illegal because the FIA ​​had not changed the regulations to allow it – so Mercedes found themselves risking a protest if they raced with it for qualifying. The component was withdrawn for Saturday after Mercedes said it had made no improvements.

Additionally, Wolff believes rival teams are briefing their drivers to minimize concerns so as not to encourage the FIA ​​to act on the matter even more quickly.

Disagreements between Mercedes and its rivals reportedly came to a head during a team bosses meeting on Saturday morning at Circuit Gilles Villeneuve, when Wolff expressed his anger at others for playing political games.

Sources suggest he expressed disappointment that others were trying to gain competitive and political advantage through something that was a genuine safety issue for his drivers.

Asked by Motorsport.com about both the porpoising situation and the encounter, Wolff couldn’t hide his annoyance at the way things were going.

“It’s a sport where you try to maintain a competitive edge or gain it,” he said. “But this situation has clearly gone too far.

“All the drivers, at least one in each team, said they were in pain after Baku, struggling to keep the car on track or blurry vision.

“Team bosses trying to manipulate what is being said in order to keep the competitive edge and trying to play political games when the FIA ​​tries to find a quick fix, to at least put the cars in a better position , are dishonest. And that’s what I said.

“I’m not just talking about the Mercedes: all the cars suffered in one way or another in Baku, and still do here. Cars are too stiff. Cars bounce or whatever you want to call it.

“We have long-term effects that we can’t even judge. But anytime it’s a safety risk, and then coming up with little manipulations in the background, or Chinese whispering, or briefing the drivers, it’s just pitiful.

While Mercedes duo Lewis Hamilton and George Russell have been the most vocal about porpoising and bottoming issues, Wolff thinks it’s wrong that his rivals believe his drivers are speaking out with the aim of making their cars faster .

Wolff says a host of other drivers are also unhappy with the situation, including Red Bull’s Sergio Perez.

“Of course people will wonder if my position is sincere or not,” he said. “That’s why I say it’s not just our problem. But if a Red Bull driver says you’re hitting 300kph, that’s when the problem occurs, and with these problems “you can even lose your sight when braking or failing to position yourself correctly. the car,” as Perez said. .

“Then you listen to the words of [Carlos] Sainz, what are you listening to [Daniel] Ricciardo said, we listen to what [Esteban] Okon said, [Kevin] Magnussen and our two drivers.

“It’s not a team problem. This is a ground effect car design problem that needs to be fixed before we have a situation of any kind.