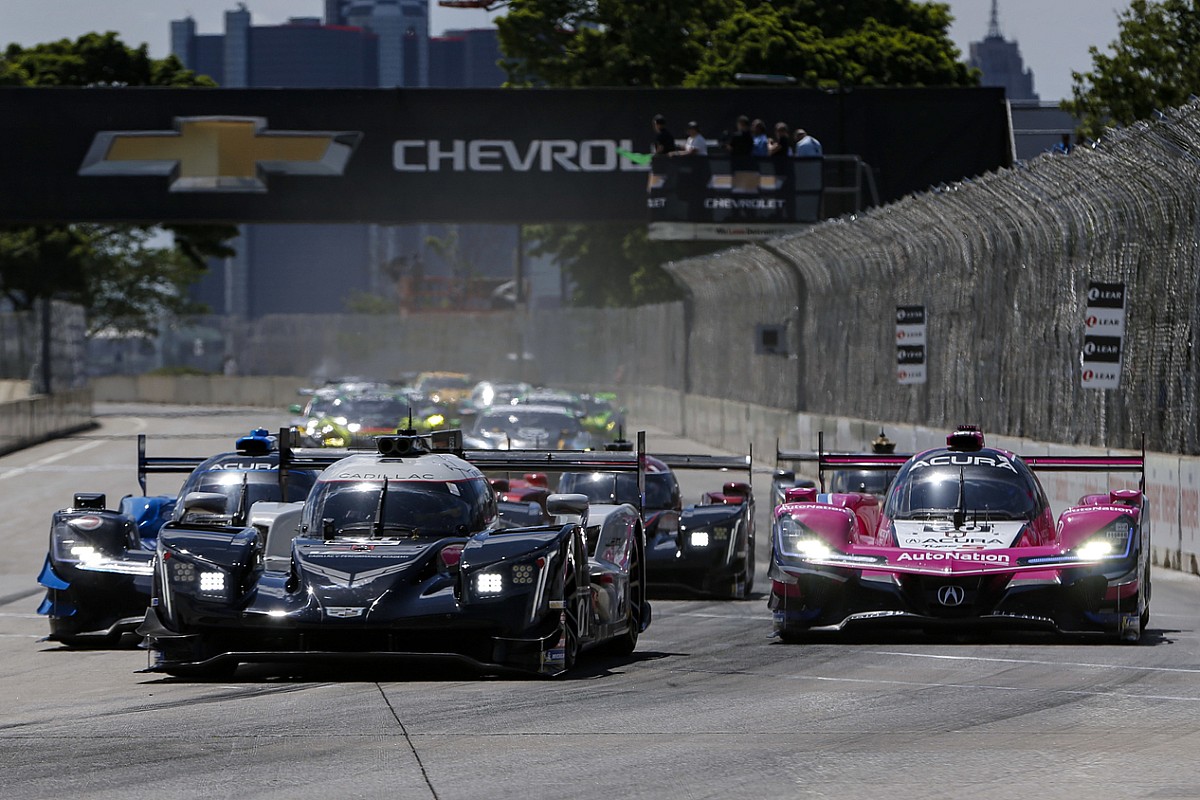 Bourdais in the Ganassi Cadillac on pole held off Tom Blomqvist’s Meyer Shank Racing Acura early in the race, with Ricky Taylor retaining third in the Wayne Taylor Racing Acura ahead of Alex Lynn in the second Ganassi Caddy.

Blomqvist wouldn’t let Bourdais start in the lead, running less than a second, and Taylor was only a second behind, but by lap 5 Lynn was already five seconds behind that trio. Despite this, he could not hold Vautier and Pla who were fighting over the bottom of the class.

Finally, on lap 16, Bourdais extended his lead to 1.5 seconds, with Blomqvist maintaining a one-second lead over Taylor. Lynn is now nine seconds behind Taylor but remains ahead of Vautier. Derani was now 1sec faster than Pla’s best, but wasn’t really winning over Bourdais.

By Lap 25, the leading trio had stretched, in part due to where they caught the GTD traffic. Bourdais now had a three-second lead over Blomqvist, who had a four-second margin over Taylor.

WTR pitted the No.10 on lap 29, and Filipe Albuquerque took over and emerged about eight seconds behind Derani who set a new lap record on lap 30, of 1min19.808sec.

Vautier handed the JDC-Miller car to Richard Westbrook on lap 31 and dropped to sixth place.

With 50 minutes remaining, halfway through the 1:40 race, Bourdais finally stopped, at a time when Blomqvist had reduced his lead to 1 second. Ganassi ensured van der Zande in the #01 car stayed ahead of the MSR Acura now driven by Oliver Jarvis. The pair of course emerged behind the off-strategy Derani, who stopped on lap 40 and returned to strategy. He came out fifth, just ahead of Westbrook, but 18 seconds behind the No. 02 Cadillac that Earl Bamber had picked up from Lynn.

Up front, their teammate held a 1.7 second advantage over Jarvis, while WTR’s Albuquerque ran less than a second behind the similar MSR car. However, Albuquerque suddenly stopped on lap 45 and fell to the back of the class, and the moving man was Bamber, charging hard to close in on van der Zande and Jarvis.

Lap after lap he was making it work, shaving tenths off the leaders on each lap so that with half an hour to go he was just four seconds behind van der Zande, who had the Jarvis’ Acura filling its mirrors. As Bamber charged, Derani did too, setting an incredible 1min18.877sec on his 51st lap, drawing within 12sec of the lead.

By lap 53, the top three were covered by a second and Derani was only 6 seconds further. Just five minutes later, the trio was a foursome, covered by 1.5 sec. Bamber took a look outside of Jarvis at turn 11, but locked in and couldn’t get it to work.

On lap 59, Derani went down inside Bamber in turn 1 right and didn’t give Bamber much room in turn 2 left, so the Ganassi rider had to get on the pavement to avoid it. Until turn 3, the AXR car had the advantage and Derani was third.

Over the final twelve minutes the margins between the top four were accordion, and three minutes from home an unsuccessful attempt to pass the MSR Acura on Turns 1 and 2 cost Derani momentum down the long line straight to Turn 3, and Bamber pulled alongside him on the inside and grabbed the third.

There was no further change of order, but a 100-minute race that saw the top four covered by 1.7s despite no cautionary period, meant IMSA signed their time at Belle Isle with a classic.

UPDATE: Derani and Pla’s Cadillac Action Express was found to be too light during post-race inspection and was dumped at the back of the six-car DPi field.

This promoted the WTR Acura of Albuquerque and Taylor to fourth place ahead of Vautier and Westbrook in the JDC-Miller Caddy.

Roman De Angelis in the thick of the Aston Martin Vantage race on the outside of the front row escaped pole sitter Kyle Kirkwood at the wheel of Vasser Sullivan Racing’s Lexus RC F.

On lap 18, Russell Ward lost the front of his Winward Racing Mercedes on the exit of turn 10 and hit the wall, but he ran the car down in the runoff from turn 11, so no flag warning was necessary.

The 35-minute mark meant amateur GTD riders could reach pit lane and hand over to their pro teammates. De Angelis was one of the last to come in, handing over to Ross Gunn, but not the last. It was Kirkwood, who lapped the Aston Martin one more lap before pitting and passing Ben Barnicoat. His lap was strong, and sure enough, Barnicoat came out ahead by three seconds.

Behind, PMR had kept the #1 BMW M4 in third place and now had Bryan Sellers at the wheel, 4.5 seconds ahead of Aaron Telitz who had taken over the second Lexus from Montecalvo. Mike Skeen now drove Korthoff’s Mercedes in fifth, while Jeff Westphal moved the Carbahn with Peregrine Racing’s Lamborghini Huracan around Ryan Eversley’s RWR Acura.

With 35 minutes left, Gunn and Sellers closed in on the lead Lexus, and Gunn was less than two seconds behind. With 27 minutes to go, Barnicoat, Gunn and Sellers found themselves behind the mismatched Wright Porsche of Heylen, which finally pulled away for them.

After this point, Barnicoat began to drift away from the HoR Aston, and the two were drifting away from the Salesmen’s BMW. Barnicoat came home 2.26 seconds ahead of Gunn, with Sellers 3.6 seconds behind.

Telitz/Montecalvo were best of the rest in the #12 Lexus ahead of Korthoff and Carbahn/Peregrine, while Heylen’s oddly slow Porsche took seventh when Eversley’s Acura died at Turn 9, five laps behind. At her place.