Editor’s note: In 2019 I participated in the KTM Adventure Rally Canada at RED Mountain Resort in Castlegar, BC. It was great fun and the course was fantastic, but unfortunately the second day of the rally was snowy. In September.

Despite that, it was a great time and I was really looking forward to seeing it again, hopefully on a snow-free weekend. There was no KTM rally in Canada in 2020 or 2021 (thanks for nothing, COVID!), so when the 22nd event was confirmed, in the month of generally blizzard-free June, I was pretty excited. And then I saw that the gathering was scheduled for the same weekend as Father’s Day. Uh, there was no way I was getting away with my family to ride in Quebec for the weekend. So I had to decline my invitation and instead received the following report from Louise Mitchell-Pond. I’ve come across Louise on rallies over the years, including the 2019 KTM rally, where she placed first overall with her husband in the R2 class! I knew she would give us a good idea of ​​how this year went, so here goes.

Neil (L) and Louise (R) were excited to get out and do another adventure rally, after a two year hiatus! Photo: Allison Thompson/KTM Canada

With the world on hold for a few years, the thought of signing up and going to a motorcycle rally was exciting enough – and the buildup was worth it! The fourth annual KTM rally, held in Saint-Michel-des-Saints, Quebec, was spectacular. It included two days of driving on preloaded secret tracks. As before, this event was not a race; the winners are the teams closest to the pre-determined target mileage on one of the two routes. R1 took riders on various challenging single tracks that included mud, rocks and fallen logs. R2 is for adventure riders who prefer something a little less intimidating, or like me who rides a bigger bike and isn’t comfortable on the singletrack for long periods of time. I have an R1200 GS and my husband Neil chose his KTM 790. At this KTM event I called us the hybrid team, even though our official name was “Louise and her husband”.

Before starting, the itinerary for day 1 was changed due to flooding. Go figure! At the last event in BC (the 2019 rally), an entire day was canceled due to snow, so a simple route change was fine with me. GPS in hand, I walked to my bike excited to start. However, I unintentionally created a “route” from the KTM preloaded tracks, rather than following the track. There is a difference !

The morning ride swept through roads that passed through many small towns including Saint Donat de Montcalm and Saint Jovit, eventually leading to the town of Mont Tremblant. In Mont Tremblant, I met two brothers who rode KTMs. One of them told me that he took the Chris Birch course and went from, maybe I can ride this, to I know I can ride this. His smiling face said it all! Meeting other riders at stops is always fun. The exchange of information cannot be measured. And no matter how experienced you are in rally life, there is always something to learn. 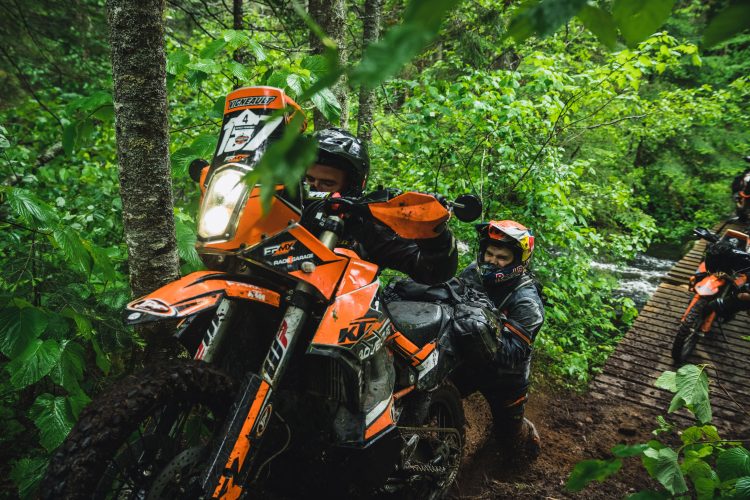 Their question was, “How did you like the gravel this morning?” Gravel? Sip! What gravel? Our journey was purely on the road. And even though my husband mentioned that I was not on the same route as his GPS, I ignored him and followed the pink line on the Nav VI. The extent of my worry was remembering to let Neil know I was shooting.

I had to rethink the afternoon route planning. Neil was going to lead using his Montana, but dropped the map changing the battery and completely lost the afternoon trail. It happens. So I figured out how to make the GPS track appear on the map. I wouldn’t get a warning for turns, but that’s what makes it a challenge. I hope I won’t lose Neil. It happens too.

Thank God I followed the lead. KTM’s afternoon ride was second to none. As I approached the Mont Tremblant park gate, I wondered if I was in the right place. There was no mention of bringing cash for park access. But the gentleman asked if we were with the rally, which was very cool because it meant we were in the right place, and he waved us through. 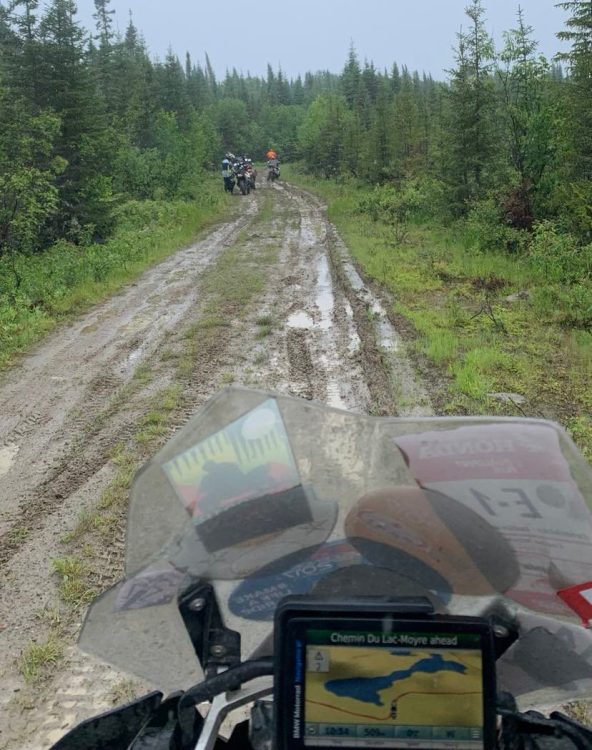 Looks like it’s time to slow down. Photo: Louise Mitchell-Pond

There are plenty of pretty things in the forest, if you take the time to stop and see. Photo: Louise Mitchell-Pond 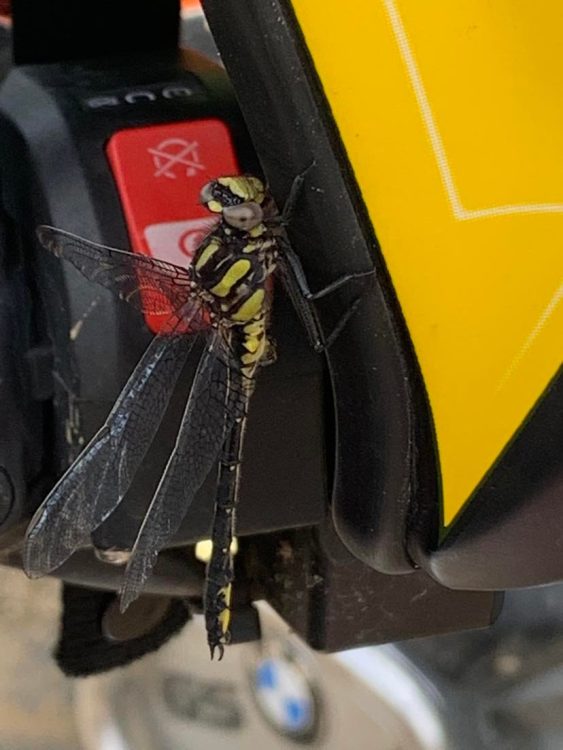 Is it BMW’s legendary “bumblebee” paint scheme, or does it come close? Photo: Louise Mitchell-Pond

Immediately I was on gravel. Dry gravel with a hardtop, the kind I like. The road wound through the forest, punctuated by bodies of water criss-crossed by beaver dams covered in lush vegetation. There were lots of beaver houses but unfortunately no beavers around. They heard I was coming. There were, however, chipmunks running for their lives across the road. Also, there was a falcon dancing between the road and the trees. But I don’t know what type it was because he was flying much faster than me. Nice big and small waterfalls were here and there. As I rode I could feel the mix of rocks, dirt, plants and water. Among this natural beauty, I hear myself say, that’s why I ride.

Day 2 started at 7 degrees Celsius, with drizzle. Not optimal for my adventure riding. Dominique Lefebvre told me that she had personally done the R2 track. She didn’t want to give anything away but I could tell she was excited. Today I made the trail bright red, hopefully that much easier to see in the rain. Overdosed with excitement and caffeine, with Cher pounding in my helmet, I approached the start line, and my last words to Neil were, keep going!

After a few turns away from the Auberge, I was on gravel. And there I stayed most of the day. Shortly after, I was on forest roads; the kind used in the fall for the different hunting seasons. These were quite spectacular as they were wide enough for a truck and imperfect enough to make the ride entertaining. It was also quite difficult as there were so many turns and other intersecting roads that I had to be very careful with the track. If I missed a turn because I was looking at the scenery, I could end up adding a lot of unnecessary miles, and again, the key to winning is riding as close to the original track mileage as possible.

As usual, all makes were welcome at the rally, although engine size restrictions were still in place this year. No small cc enduros are allowed, just like old KTM rallies. Photo: Allison Thompson/KTM Canada

Just when I thought I could do this all day, a transit took me to completely different ground. It was still raining and the trail was getting slippery. The hard logging road gave way to softer dirt with long, slippery grass. Pools of water had formed, making guesswork about their depth a sort of lottery. I did the best I could, not relishing a tip in any of them. I was on top of the world until I turned a corner and saw a field of mud and fat bikes everywhere. The international symbol of the slowdown!

When I encounter difficult stuff, I often stop and make sure I have a good piece playing. It called Queen, Don’t Stop Me Now. Because what did KTM add after that mud hole? A muddy hill. I watched two riders in front of me whistle and slide up the hill, then turned up the volume and nailed it. With drizzle in my eyes, I continued on for another hour until KTM brought me to an oasis, The Powerhouse Lac du Repos. I had a hard time containing my sadness in front of the “closed kitchen” sign, and yet it was open! Chicken soup was served with a smile as I sat next to a warm fire where I hung my jacket and gloves. I was ready for this.

After the miracle of a warm, dry building and hot soup to go with my packed sandwich, I headed out on a sunny afternoon. Without rain, there were still puddles and wet ground, but that made it easy to see. I could clearly see the buried culvert and brace myself for the splash. After leaving this bland geographic region, I was riding on an “unpaved road”, and it was awesome. The sun had dried the top layer of dirt, giving it the Velcro effect and making the afternoon ride a lot of fun on the grip. The other riders were clearly having fun too as I could see their skids around the corners. Thanks for the help !

Louise and Neil won the R2 category for the second consecutive event, and they also had fun, which is the most important thing to do when you’re on a motorcycle… Photo: Louise Mitchell-Pond

Neil still following me blindly and smiling continuously, I took us down the most beautiful driveway with bumpy rock marbled ground and a wide variety of trees hugging each other above our heads. So pretty in fact, that we ran into KTM photographers. Glad to navigate properly, I continued. Didn’t run into that many runners in the afternoon, but was fine as long as I had the red line on the map and Neil bringing up the rear. Coming out of the woods I stopped in a wide area hoping that if I were to go into the woods it would take the mosquitoes a little longer to find me. A dragonfly came and I felt happy enough that we could win the mosquito war. Light pink lady slippers were strewn here and there and it was another perfect place to inhale and count my blessings.

This adventure stuff is really fun, and KTM once again outdid themselves by providing me with trails that were just tough enough but not crazy. I’ll leave that for the other guys. By then most of the tracks were mostly dry and the afternoon sun was warming me as I listened to the tracks, the volume lower now. I was entertained by dual tracks with brush growing out the sides, sand, puddles, fallen branches, power lines and epic views. It felt like they dialed in the perfect combination of trail challenge and navigational challenge. Dominique Lefebvre and KTM had practically accomplished the impossible.

As I rode the last few miles to Auberge du Lac Taureau, I was grateful for a great day. I was grateful that I didn’t push myself beyond my abilities – that’s always a concern for me. And I was grateful when I looked back to see my biggest cheerleader, veteran Neil, still behind me smiling. We not only repeated our victory in the R2 category, but we had a lot of fun, and that’s why we went first!