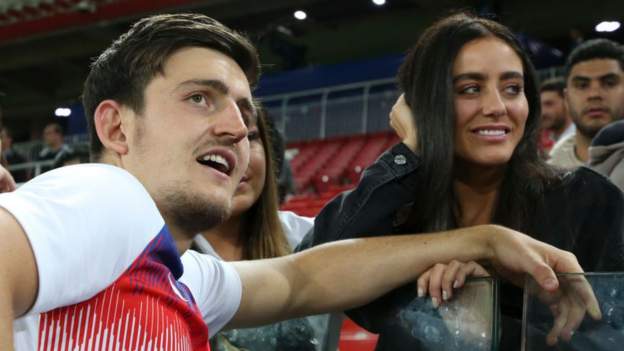 A documentary has reportedly been proposed, following the wives and girlfriends of England players ahead of the World Cup in Qatar later this year.

Southgate said the idea was “not my cup of tea” and he would be “surprised” if it came to fruition.

“I don’t like the term. It’s their partners and their family,” he said. “We want them to feel welcome.”

The phrase ‘Wag’ became common during the 2006 World Cup, when pop stars Victoria Beckham and Cheryl Cole were among the partners who traveled to Germany with the England squad and regularly featured in British tabloids.

The players’ families and partners received far less attention during the 2018 World Cup in Russia, when Southgate invited them to the team hotel, but he couldn’t do the same. last summer as England hosted most of their matches in their run to the Euro 2020 final.

“I would be surprised if the group of players we have are interested in [the proposed documentary] because they wanted to focus on football,” Southgate said.

“The focus in Russia and last summer was on the players and everything they do and we never had any problems.

“We like to involve families. It’s a great feeling when you have children, in particular. It changes the dynamic of the hotel.

“We couldn’t do that last year because of Covid, but it’s a big family. Everyone recognizes that some of what we’ve been doing has been very good over the last two years. “

Speaking alongside Southgate at a press conference on Monday, England captain Harry Kane said: “I think Gareth has hit the nail on the head.

“We created this really good environment where friends and family, girlfriends and wives were part of the team and the group, especially when we were away.

“Last summer was obviously a bit different, but I was not contacted about my wife [being involved in the documentary] and she didn’t, so I don’t know who did.

“We want to focus on the World Cup and we don’t want to distract from it.”

England play the final Nations League game of the current international break against Hungary on Tuesday and begin their World Cup campaign against Iran on November 21.

Southgate tries ‘not to change tactics’ because of criticism

England have been criticized for their performances in their three Nations League games in the last 10 days, scoring just one goal – a late penalty from Kane which earned a Draw 1-1 in Germany.

But Southgate, who led the Three Lions to the 2018 World Cup semi-finals, 2019 Nations League semi-finals and Euro 2020 final, explained how he must balance the desire for results short-term positives with the team’s long-term plans. .

“I’ve seen it worse and haven’t too often seen it better than we’ve had it,” he told BBC Radio 5 Live.

“You really have to deal with all of this and not get distracted, not change your mind about the things you need to see and try to force players who maybe shouldn’t be playing because, personally, as a individual, you want a result, because you think it might help your position.

“You know it’s not going to help England. It’s always my priority, doing the right thing for the team, [and] in front of Qatar, it’s really subjective.

“We want to succeed in this tournament, that does not change, but you accumulate several objectives and it is always difficult.”

As well as the draw in Germany, England lost 1-0 in Hungary and drew 0-0 at home against Italy on Saturday, leaving them bottom of Group A3 ahead of Tuesday’s reverse fixture with Hungary.

“We understand that in this last period of games we haven’t had the results that people would have liked, but I think there are a lot of mitigating factors,” Southgate added.

“We are playing against top teams. For years there has been no challenge between the tournaments you have been rated on, apart from friendlies.

“Maybe the team changed everything at half-time, or 60 minutes here or there. So [there was] less pressure, but we had more competitive games than any other English management team I would say.

“The level of games is higher, but it helped us before the Euros, and it will help us before the World Cup, to be better prepared for what we are getting into.”