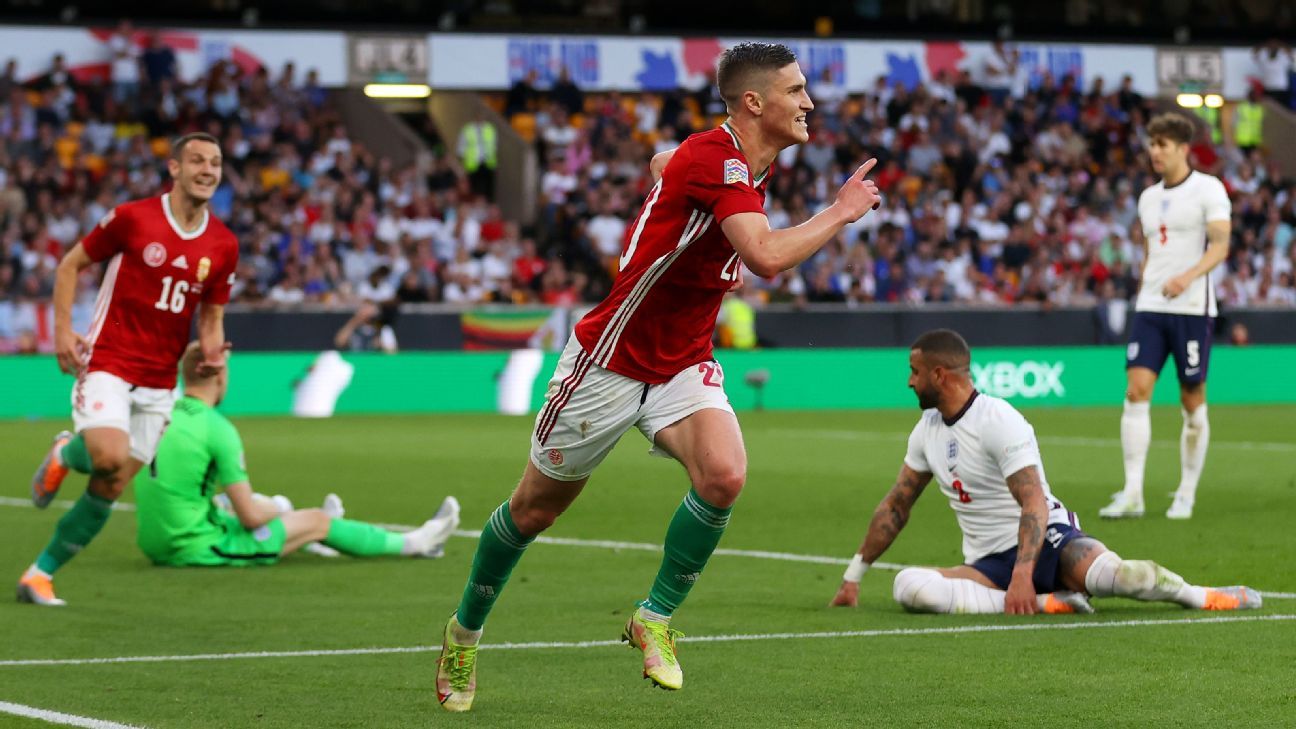 England are eyeing the prospect of relegation from UEFA Nations League Group A3 after suffering their worst home defeat since 1928 with a 4-0 loss to Hungary at Molineux on Tuesday.

Roland Sallai found the net in both halves to propel the visitors to their first away win over England since a famous 6-3 victory at Wembley in 1953. England’s misery was made worse in the final 10 minutes when Zsolt Nagy and Daniel Gazdag scored again and John Stones received a second yellow card to make it one of the worst nights of Gareth Southgate’s reign.

England remain winless and bottom of their Nations League group with two points from four games, including a 1-0 loss to Hungary in the reverse fixture earlier this month. Hungary lead the group with seven points, ahead of Germany and Italy. The group winners will go to the Nations League final next June while the bottom team are relegated.

Southgate made nine changes from the side which drew with Italy at the weekend to give some fringe players a chance. But despite dominating possession, England created few chances and experience backfired, leading to loud boos from the home support.

“It’s not nice,” Southgate said. “The irony is that the pressure we had and the reputational comments came in both Nations League campaigns, and in neither campaign were we able to choose our strongest teams. for the matches. The matches where every other England coach was judged, we had the best performances for 50 years.

“So there’s a balance in my head. I’m really clear. But I totally understand tonight’s response. I totally understand that there’s been this narrative all week. I didn’t think that it was ok after the game against germany but tonight i can’t disguise what happened tonight in any way but if we are judged on the games with our full players , then I think that’s a different assessment.

“So I have to accept that the next period is going to be unpleasant and uncomfortable. But that’s the life of a football manager, you’ll never be six like we had and you won’t have bad nights.

“I know great people like Sir Bobby Robson, what he had to go through and how he was perceived at the end to get the team to a World Cup semi-final. Football is emotional. People pay to come and watch. They’re going to give an opinion. The team wasn’t able to deliver tonight, my responsibility. And so if the flak comes my way, I have to deal with it. It’s not unrealistic to have had the ride I had for five years and not have bad nights, rough nights.”

Sallai started the rout when he controlled the ball on his knee after a missed header from Stones before going past Aaron Ramsdale in the 16th minute.

Sallai scored a second in the 70th minute with a perfect finish with the outside of his boot after Kalvin Phillips lost a tackle. Nagy chipped Ramsdale and Gazdag pushed from wide into the corner for two late goals that pained England.

England captain Harry Kane, who provided some of England’s rare quality moments and hit the bar with a header, acknowledged his side’s second-half capitulation was “unacceptable”, but urged fans to to forgive.

“It’s our first big loss in a long time. Now is not the time to panic, it’s time to hold our heads up high,” he said.

“We have to take it on the chin and move on, prepare for the World Cup, we will learn a lot. … Let’s not forget where we come from. It won’t be perfect every game.”

After reaching the semi-finals of the last World Cup in Russia and then narrowly losing the Euros last year to Italy, England have high hopes for the World Cup in Qatar at the end of This year. But their dismal form in the Nations League baffled fans and saw boos ring out as they walked out of the Molineux pitch.

It was the first time England had lost a home game by four or more goals since March 1928, when Scotland beat them 5-1.

Information from Reuters was used in this report.