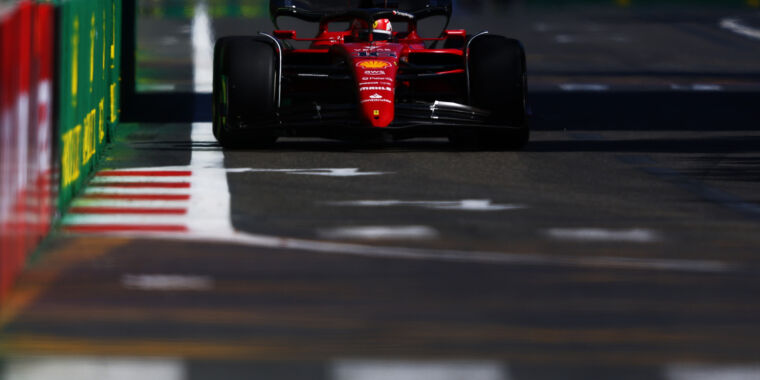 The sport of Formula 1 saw a massive change at the start of this season introducing new cars that exploit aerodynamic ground effects to push them around the track. The aero approach was last used in F1 in the late 1970s and early 1980s before being banned for safety reasons.

One problem, then, that perhaps should have been anticipated this time around was a condition called porpoising, where cars oscillate vertically at a fairly high frequency while traveling at speed, violently shaking the driver in the process. As this season has progressed, the Grand Prix Drivers Association has been increasingly vocal about the potential health risk this poses to these athletes. And on Thursday, the Fédération Internationale de l’Automobile (or FIA, the sport’s governing body) announced that it intended to do something about it.

As air moves under the bodywork of an F1 car, it expands when it reaches the venturis at the rear of the car. The faster the car goes, the more downforce it generates via this expansion, until at a certain point the airflow detaches from the ground and stalls. This immediately erases all downforce, and without this effect sucking the car to the ground, it lifts on its suspension.

The problem is that this then puts the car back in a state where the airflow re-attaches, and so it’s sucked down to the ground, speeds increase, then the airflow stops, and the car reappears. Lather, rinse and repeat several times per second. When this happens, the driver is jerked up and down to the point where some are reporting issues.

The FIA ​​has issued a technical guideline, TD039, which gives teams an idea of ​​how the organization plans to deal with the issue. One way to reduce the effect will be to pay more attention to the “legality board” – a composite sheet of wood called Jabroc which must have a certain thickness at the end of the run to prevent the cars from rolling too much near the ground. The FIA ​​will also come up with a metric, based on vertical acceleration, for the acceptable amount of porpoising.

“The exact mathematical formula for this metric is still being analyzed by the FIA, and Formula 1 teams have been asked to help with this process,” the FIA ​​said.

German publication Auto Motor und Sport has apparently obtained a full copy of the technical guideline and provides more details. It indicates that the swing limit will be determined after the three free practice sessions of a Grand Prix weekend. Teams will be required to run three consecutive laps without using the drag reduction system to generate a baseline for porpoising, and the FIA ​​will monitor teams to ensure no one runs at a slow uncompetitive pace to avoid the phenomenon .

The FIA ​​will then determine a safe setup for each car’s ride height, spring rate, damper settings and aero profile. These cannot be changed except to raise the ride height even further or make changes to tire pressure, front fender settings or other adjustments necessary to deal with weather conditions or the cooling. And if a team can’t reach the FIA ​​limit, the FIA ​​can order them to raise the ride height by a sizable 10mm.

The technical directive applies from the Canadian Grand Prix this weekend.