Israeli immigrants from the UK are likely to turn out in force on Saturday night to watch English football club Tottenham Hotspur play a pre-season exhibition match against AS Roma at the Sammy Ofer Stadium in Haifa, northern Haifa. Israel.

The North London club have long been associated with their Jewish supporters, as detailed by the Jewish Chronicle, to the extent that their fans – Jews and non-Jews alike – eventually adopted the insulting epithet Yid thrown around by their rivals, and became known as “the Yids” and “the Yid army”.

But for our family, Tottenham has a special meaning. One of his players saved my stepfather’s life.

Ralph Freeman (then Rolf Friedland) was born in Berlin in 1920 and was an ardent footballer and fan from an early age.

By the late 1930s, stranded and alone, he desperately sought to leave Germany.

Her younger brother had been sent to the United States in 1936 with a relief organization.

His parents had obtained visas and had gone to England, presumably to try, unsuccessfully, to have Rolf followed.

The Kindertransport – the rescue effort to get children under the age of 17 out of Nazi-controlled territory to Britain – had not yet started and Rolf would have been too old to qualify, anyway.

The match, attended by Hermann Goering, Rudolf Hess and Joseph Goebbels, is remembered less for England’s victory than for the sight of the England team giving the Nazi salute before the start of the match.

Hours before kick-off, Football Association secretary and later FIFA president Stanley Rous told the England outfit they should give the Nazi salute as a mark of respect for the German hosts.

The players were furious and Nevile Henderson, Britain’s ambassador to Berlin, had to step in and explain that the salute was a ceremonial gesture and not an endorsement of the Nazi regime.

Captain Eddie Hapgood – who reportedly compared Hitler to his ex-girlfriend, saying she had a fuller mustache – reportedly said they could “stick the Nazi salute in a place where the sun doesn’t shine”.

At the end of the match, Rolf Friedland hung around until the England players came out of the stadium, and approached England left-back, Bert Sproston, imploring him for an invitation to England.

Sproston, then a Tottenham Hotspur player, was not a fan of the Germans, having said (in a North West English accent): “I’m just a boy working in Leeds. I don’t know politics and such. All I know is football. But from what I see, your feller from Itler is a mean little moron (dumb).

On his return home, Sproston, with the help of Tottenham, immediately went to the Football Association to seek permission to invite Rolf to England for an England v Rest of the World game at Highbury in the north London on October 26 this year. .

The British visa that allowed Rolf Friedland to visit England for two weeks in 1938. (Courtesy)

The necessary documents were authorized and provided, and on October 22, 1938, Friedland left Germany, arriving at the port of Harwich on the east coast of England four days later.

At Tottenham’s invitation, the bewildered youngster spent his first three nights in the club’s locker room at White Hart Lane.

His next challenge was to extend his visa for two weeks beyond the impending November 9 deadline, which would have condemned him to return to Germany. He traveled to Woburn House, just off Euston Road, to an office set up to help refugees. There he managed to get his visa extended until the end of the year, and later longer, after securing a job in market gardening on a family estate in Hertfordshire.

In June 1941, Rolf joined the British Royal Pioneer Corps, which accepted recruits from enemy nations, including many Austrian and German Jews.

In 1943 he changed his name to the more English Ralph Freeman, so that he would not be so easily identified as a Jew if captured as a POW. 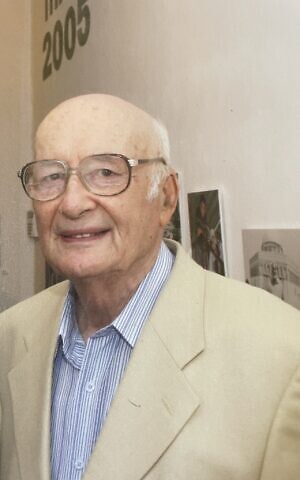 In June 1943, while on a Welsh beach near his base, Ralph saved the life of a drowning boy, later receiving an Honorary Testimony from the Royal Humane Society, signed by the Duke of Gloucester.

He shared a barracks with late Czech-born publishing magnate Robert Maxwell, then known as Ján Hoch, whom he despised.

He was later wounded in the Battle of Falaise Gap in France in 1944.

Unsurprisingly, my father-in-law became a lifelong Tottenham supporter and stayed in contact with the Sprostons for many years. Bert Sproston died in 2002.

Ralph’s grandmother perished in Theresienstadt, a ghetto camp in Czechoslovakia. One of his uncles was on board the ill-fated SS St Louis, which left Germany in May 1939 en route to Cuba, from where the 900 passengers hoped to reach the United States. But Havana refused to let them dock, as did the United States when the ship tried to anchor off Florida. The ship was due to return to Europe and the uncle was one of 254 passengers killed as the Nazis spread their net across Western Europe.

Thanks to Sproston’s singular act of humanity, Ralph was saved. He then married Eva Gusdorf – herself a Berliner, who had lost both parents to the Nazis. The couple had one son, my husband, who immigrated to Israel in 1974 and now has five children and six grandchildren, all living in and around Jerusalem.

Ralph and Eva, who started a successful business in London and set up a trust to help children with special needs, immigrated to Israel in 2005. Ralph died aged 89 in 2010, followed by Eva, aged 95 in 2013.

Seven members of our Israel-based family will be at Sammy Ofer on Saturday. Because, in our household, Ralph’s passion for British football has a permanent and very personal dimension.