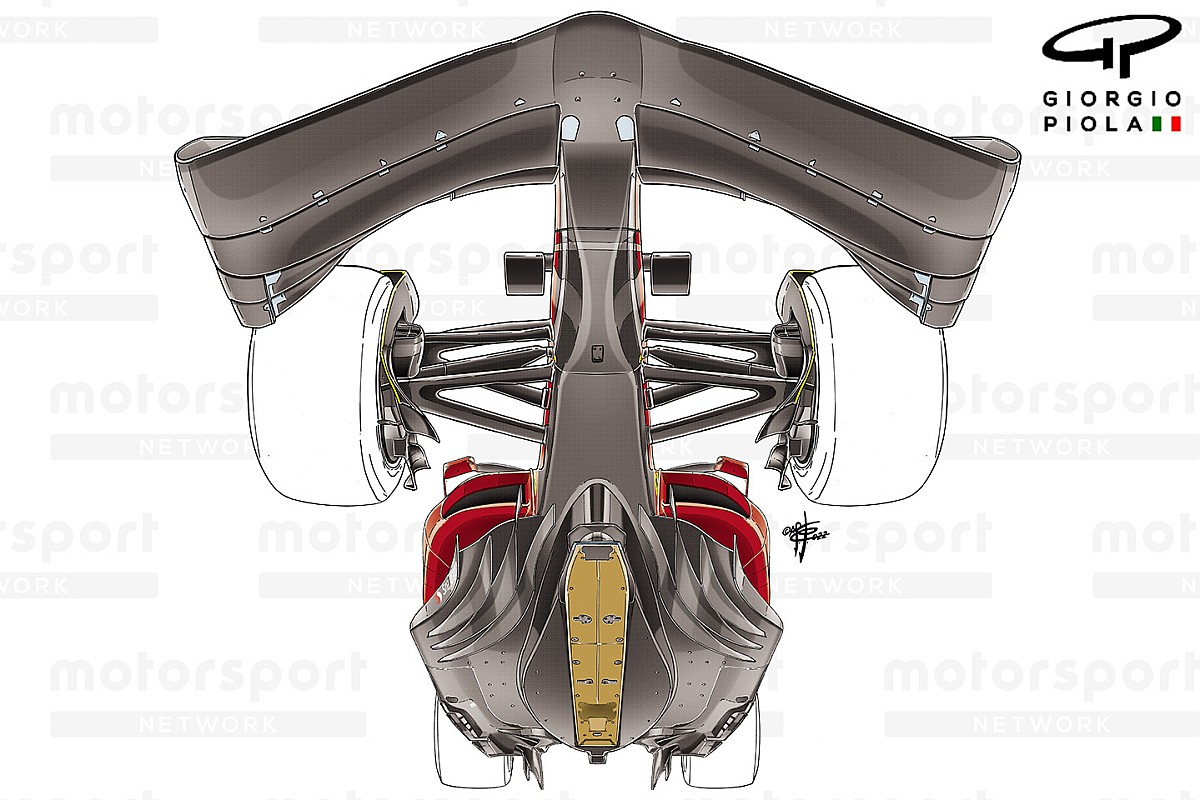 As each race progresses, teams accumulate more data and better understand how to maximize performance, while combating the harmful effects of porpoising.

The phenomenon, which surprised the majority of the grid when their cars first entered the track, has been a focus of concern for the teams, as reducing its amplitude will unlock more performance. All teams have suffered from porpoising to one degree or another, due to a number of factors that lead to its occurrence.

A simplistic approach to alleviating the problem is to increase the ride height of the car, but this would not only compromise aerodynamic performance, but would also significantly reduce the configuration options available. For many, this means a more fundamental approach should be sought, with some teams needing to be more pragmatic about how long it will take to find a suitable solution.

In the meantime, the development battle rages on and teams have been busy using new floor designs, not only to improve aero performance, but also to save weight. The latter is exceptionally large considering that much of the grid has not been able to meet the minimum weight, even though it was raised just before the season to 698kg.

Given the increased loads that the floor now supports, crews had to create additional headroom. Although some of this has been removed thanks to a better understanding of the actual loads that are applied to different areas of the ground, the late modification of the regulations to include a metal support in front of the rear tire was also significant. This not only reduces porpoising, but also offsets the stiffness it offers over any weight reduction plan.

Given the manufacturing lead time for the floor, which is by far the largest component fitted to the car, the teams opted for a patchwork-quilt style approach, allowing them to swap sections of the floor, rather than having to make an entirely new floor every time.

While this adds weight, it makes them extremely nimble in development and keeps costs down, which is a hugely important factor when considering the cost cap ramifications on teams this season. 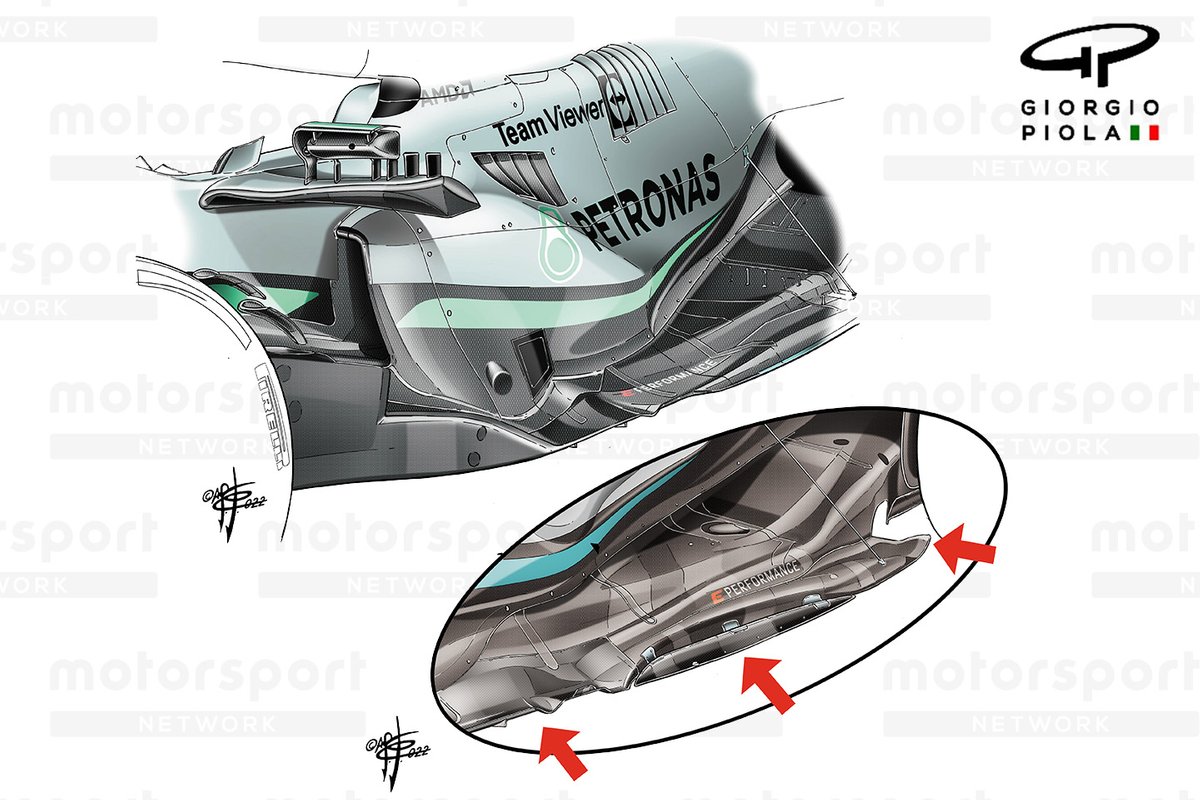 McLaren created a kerfuffle during pre-season testing when its interpretation of the edge wing was first seen. However, any wrongdoing was quickly snubbed and several teams – including Ferrari – have since copied the design, having clearly seen the promise when they conducted their own CFD and wind tunnel analysis of the design.

Although Mercedes did not go McLaren’s route, its floorpan featured an edge wing as part of the latest redesign. The W13 is more scythe-shaped and allowed the team to alter the geometry of the ground it flanks. Gurney-style flaps have been added to the periphery of the floor just ahead of the edge fender and the raised section ahead of the rear tire has also been optimized. 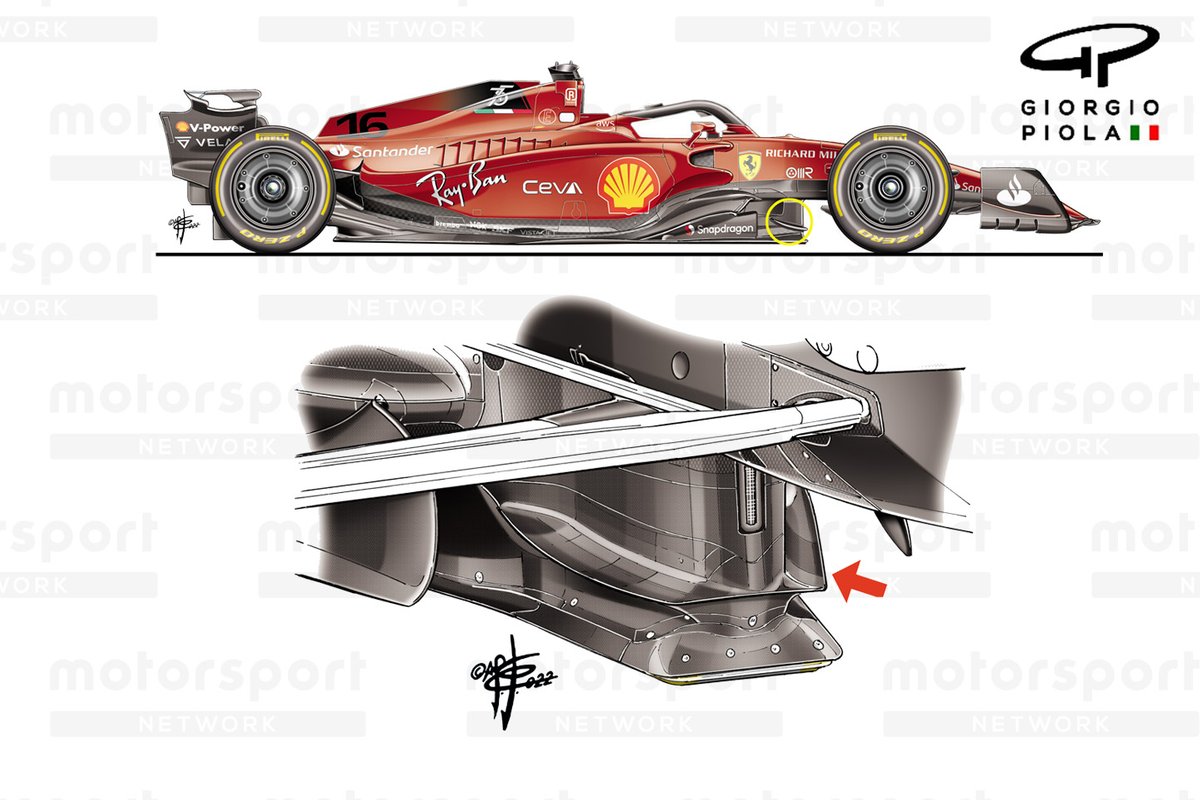 Another area where teams have tracked the progress of rival designs is the keel, with Aston Martin having put the wheels in motion on a solution that has found its way onto several other cars. Ferrari was the quickest responder in this regard, as it had a version of the ‘bib wing’ ready for the F1-75 launch just a week after it was seen on AMR22.

Red Bull soon followed, with the Alpine A522 and Mercedes W13 now also fitted with sporty versions of the winglet, as well as keel shape optimizations to take advantage of the new flow conditions.

Red Bull has charted its own course in many ways, with the RB18 featuring one of the most refined floor designs on the grid. Unsurprisingly, some of these design features are also found in the designs of its rivals, so let’s dive deeper into what Red Bull does… 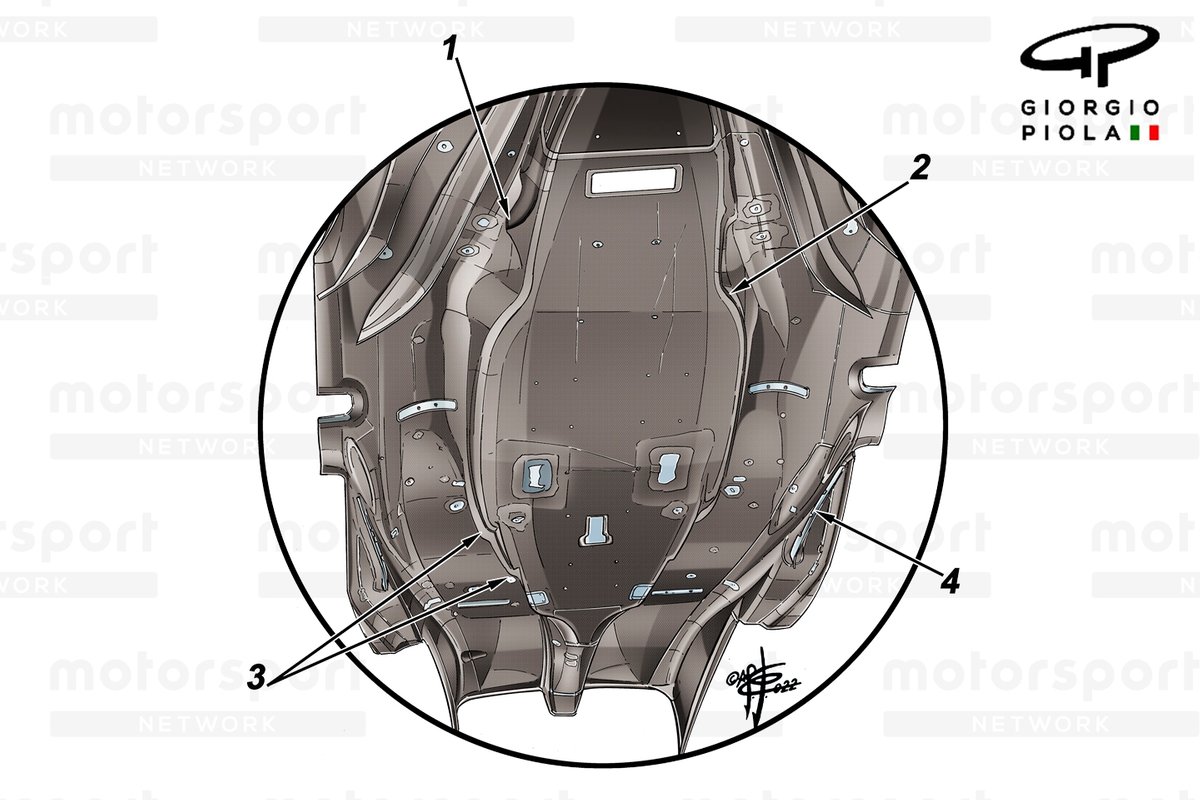 The level of contour seen on the underside of the RB18 is considerably different from what is seen elsewhere. While most teams seem to have a slight bend to the boat-shaped midsection, Red Bull has a steep bend [2] roughly in line with where the outward sloping strakes terminate with the edge of the ground.

To soften this sudden transition, there are also a number of crimps in the side wall of the tunnel [1], which itself seems to have a lot more domed roof than most of the other solutions used by its rivals. While that means it doesn’t use the maximum allowable space allowed by regulations, it likely reduces throughput instability over a wider range of ride heights.

Red Bull also used a multi-step keel design as the floor tapers into the diffuser section at the rear of the car. [3] and is a feature that Ferrari incorporated in its latest redesign and something we’ve seen at McLaren as well. 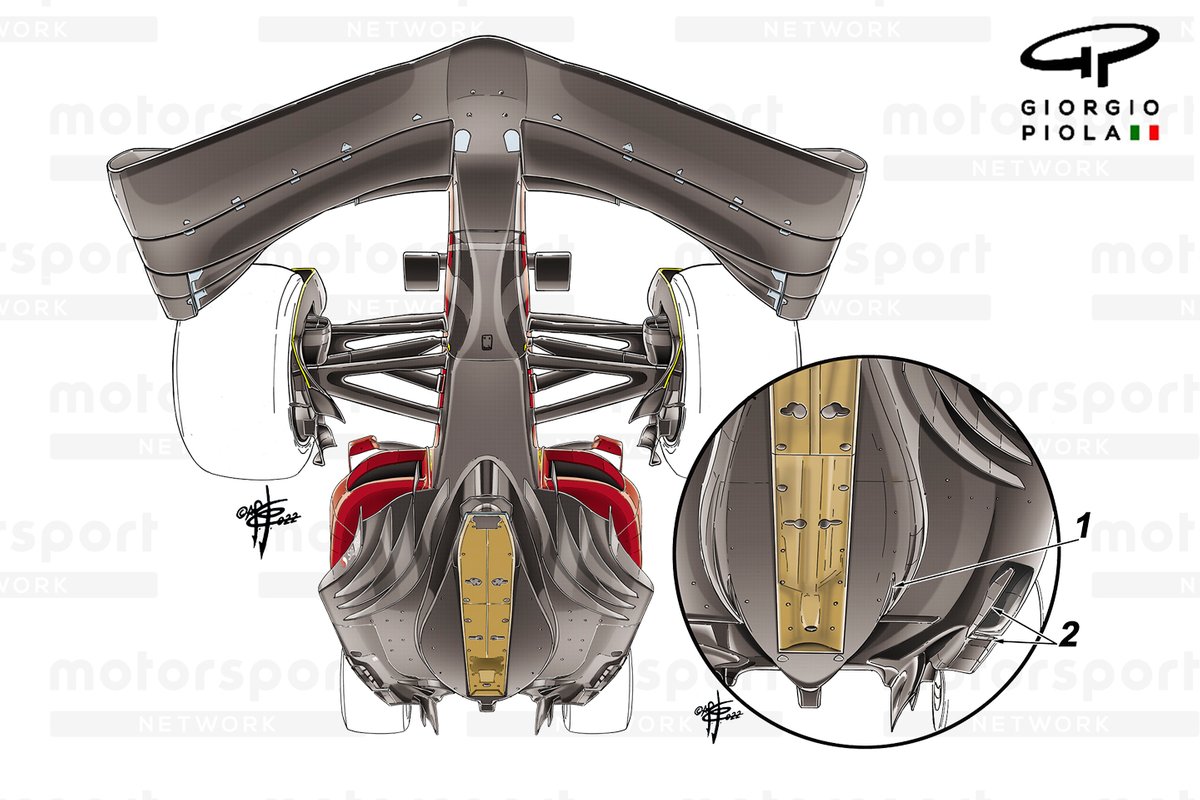 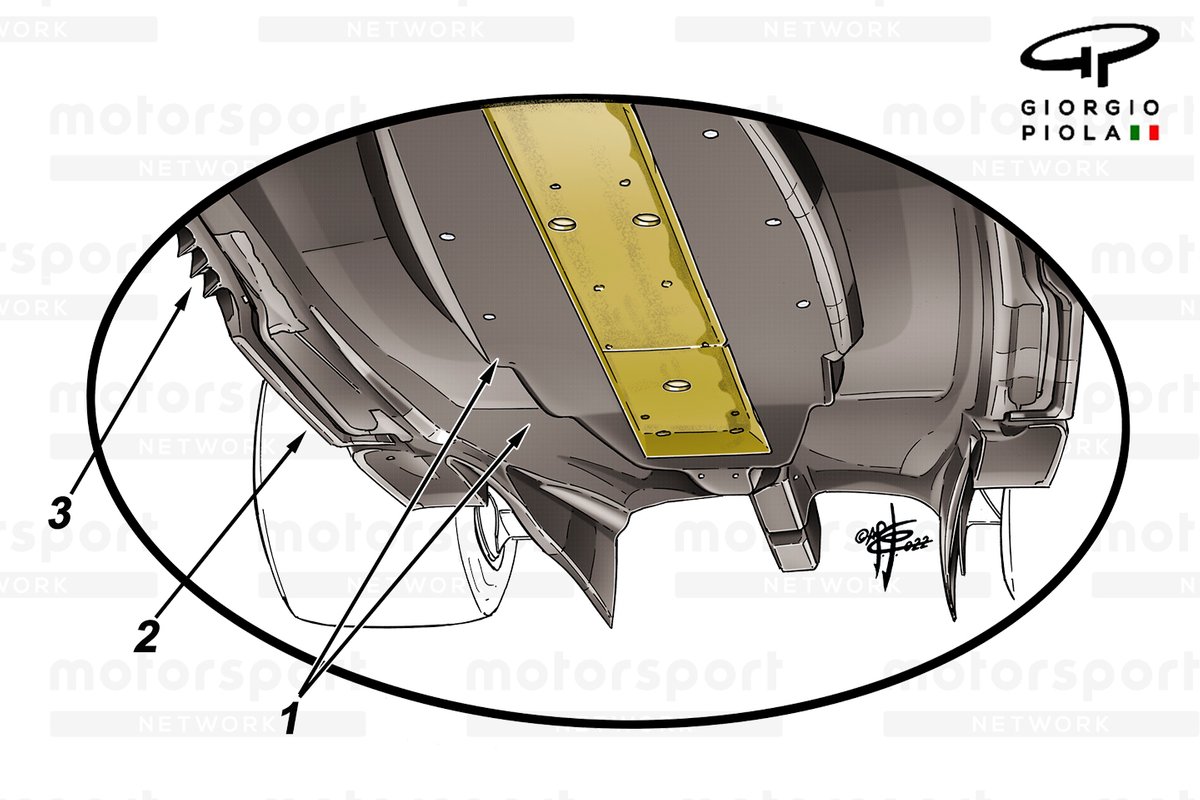 This region is not a one-size-fits-all solution, with each team sporting their own interpretation. For example, the Red Bull and McLaren floors have three steps, the Ferrari one has only one.

Another interesting design feature from Red Bull that has been making headlines recently is its “ice skate”. There were initially question marks over how it is possible to have such a feature here, but it has since become clear that this is Red Bull’s interpretation of the edge wing, housed under the ground, rather than on top.

The ice skate includes a strake that hangs below the floor from the six permitted mounting brackets. 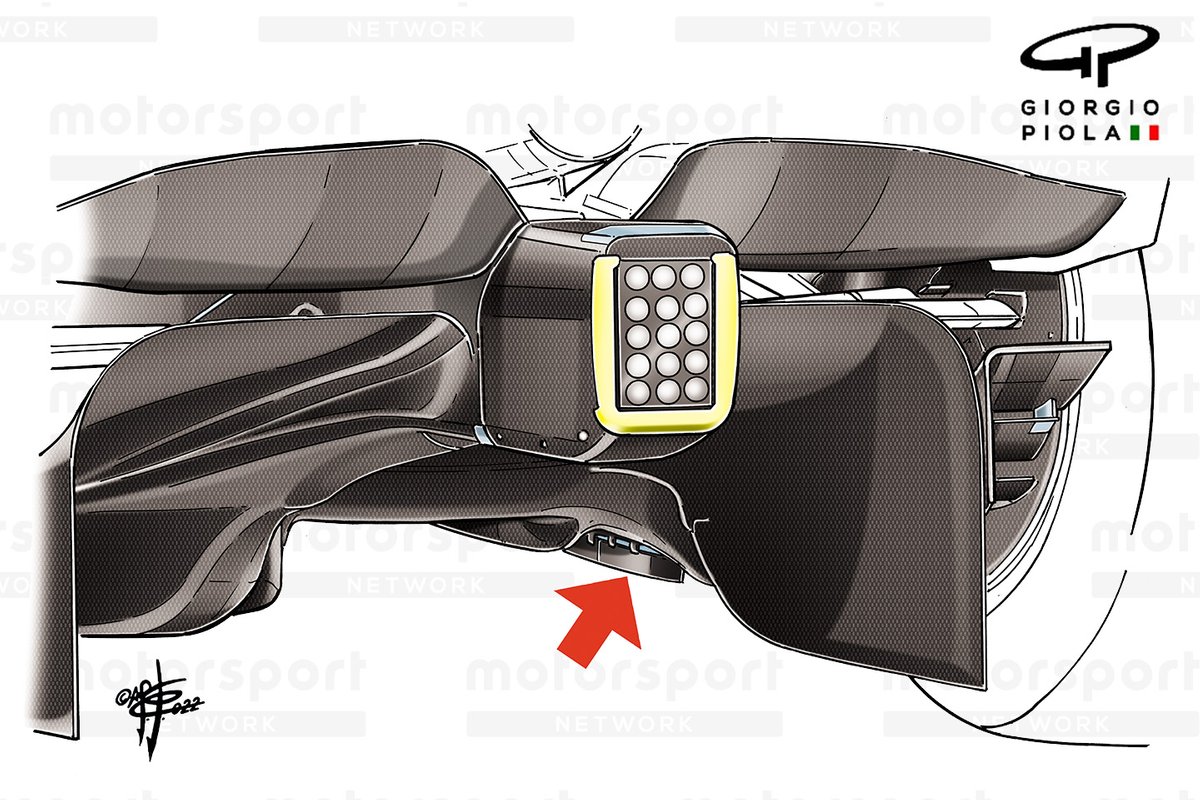 The brackets are metal, as is the strake, as the team exercised caution as it could come into contact with the track surface as the ground flexes towards the ground.

Although not its main function, the choice of material can also allow the skate to provide some rigidity to the ground, although this may not be necessary as Red Bull may have the strategy to Most complete internal stay on the grid (see below).

The primary function of the skid is aerodynamic, with a strake there, although not what was intended by edge wing regulations, providing support for the various flow structures around it.

This will not only help improve the performance of the tunnel under the floor, but also reduce the penetration of tire jets into the diffuser section by altering the path of the airflow and the vortices already in motion. 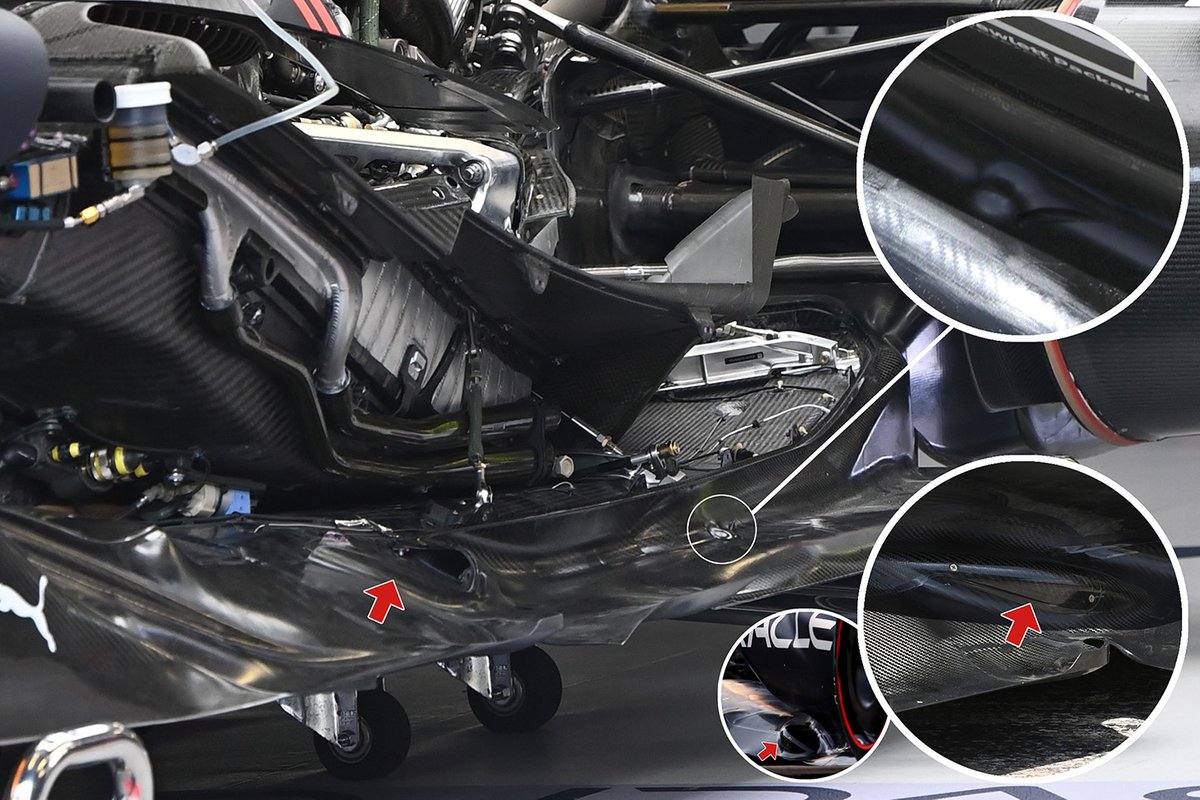 Back on the surface, the team made an interesting change to the ground as part of the update package introduced in Spain. A large teardrop-shaped blister can now be found embedded in the ground next to the pontoon, which appears to open a pathway for airflow to expand from inside the pontoon to the channel that passes beside it (arrows red).

The air circulating in this channel then appears to exit through a nozzle-shaped outlet further downstream (upper right inset), the topography of the panel in which it is housed being optimized to adapt to both the outlet flow and the external flow conditions.

The blister also seems to offer some neat flow adjustment characteristics as the airflow also moves around the side pontoons (smaller and lower inset). 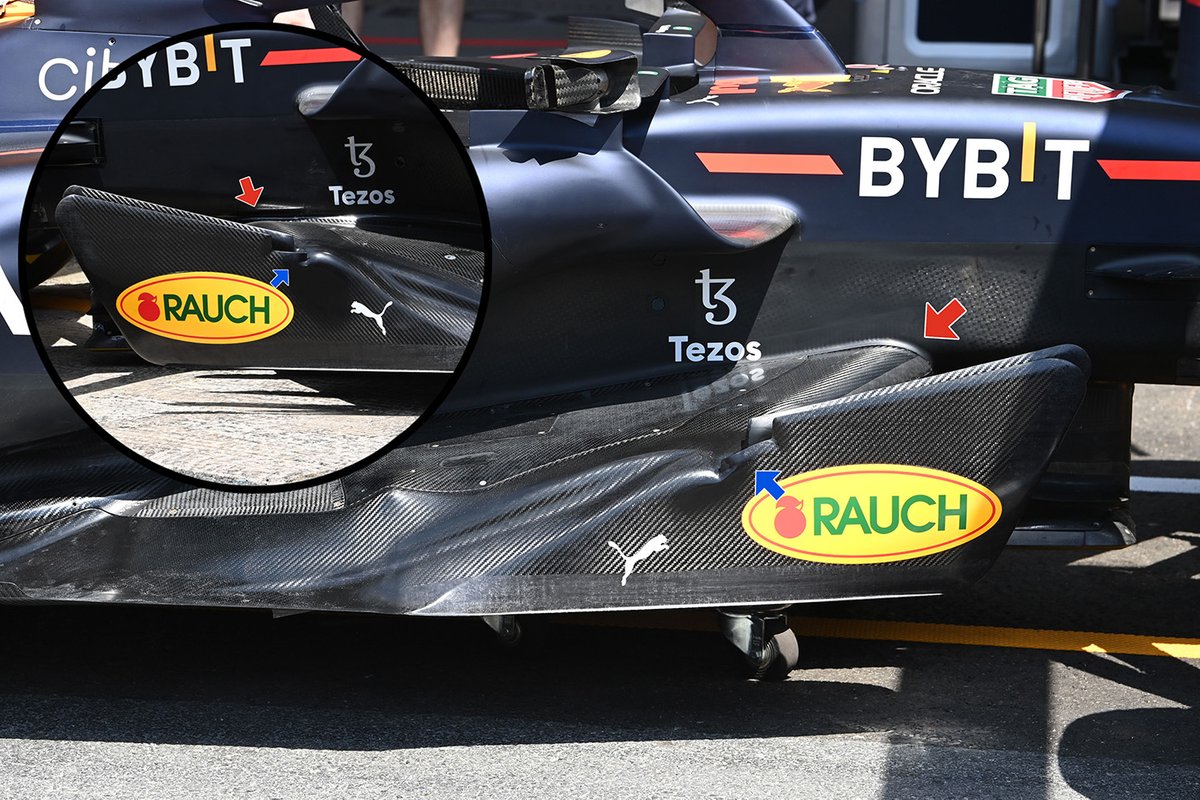 Further changes were made to the floor for Azerbaijan, as the team not only optimized the floor strake and floor boundary transition (blue arrows, old inset), but also the edge height and geometry ground attack.

Previously, the leading edge had dipped to meet the chassis below the equator line, causing the outer end of the floor to be higher than the inner end (red arrow, old inset).

The leading edge has now been raised in this region and sits to the side of the chassis instead, resulting in different flow characteristics not only for the subfloor, but also for the airflow moving through the undercut of the pontoon.

Red Bull also eventually found a need for the external floor support which was introduced by the FIA ​​ahead of the season to help teams mitigate the effects of porpoising.

The short wire stand required a little floor modification to accommodate its anchorage, and it’s much shorter than many of its rivals because it crosses the side wall of the floor next to it, rather than having to walk all the way the width to the engine cover. 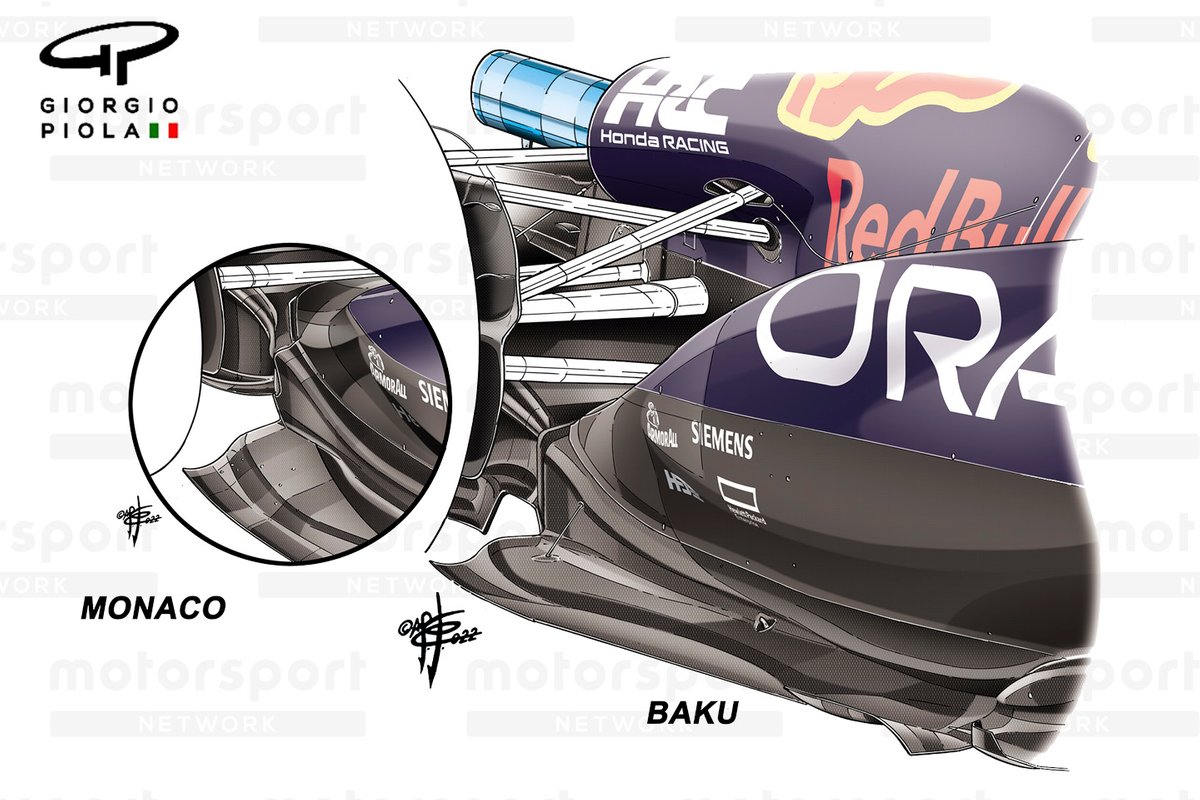