The the genius is well and truly out of the bottle when it comes to data in footballbut much more needs to be done to maximize its usefulness.

In today’s thought experiment, Athleticism ask…should we adjust all player metrics on the ball?

Let’s clarify what this would mean with an example.

In a busy summer transfer window, your team’s scouting staff are looking for a clinical striker who is quick to shoot and will score something out of thin air.

Using the data as a filter, is it more impressive for a striker to score 10 goals for a relegation-fighting team than a striker scoring 25 goals for the inevitable title winners?

When adjusted for opportunity to score, the gap between player production might not be as big as first thought.

This is a simple example, but let’s dig deeper.

Many will be familiar with some of the adjustments already made to player data. The most obvious is to look at a player’s metrics per 90 minutes rather than their total actions.

As stated in AthleticismFootball Analysis Glossarythis is a crucial adjustment so that a fair comparison can be made between players during the time they are on the pitch.

Adjustments are also made to a player’s defensive settings. Simply put, a player can only perform a defensive action (e.g. tackles, blocks, interceptions) when his team does not have the ball. If a team has less possession, a player has more opportunities to defend.

To rate all players equally, we can adjust defensive stats by counting the number of times they do these actions for every 1,000 opponent hits rather than altogether.

The question is whether we should consider this opportunity in the same way from an attacking point of view.

The impact of these “denominators” – for example “per 90 minutes”, “per 100 touches” or “per minute in possession” – cannot be underestimated, because Dan Altman, creator of smarterscout, highlights.

“Getting the right denominators is one of the most important – yet most often overlooked – parts of the analysis process. Outside of sophisticated positional play, you can only attack when in possession of the ball; you can only defend when you are out of possession,” Altman explains. “Minutes played won’t be a good denominator except to measure something a player is doing, attacking or defending – like going up for jumps.”

Let’s work through a comparison.

In Europe’s top five leagues last season, mapping players with the top 20 shots per 90 will attract many of the usual suspects. Robert Lewandowski paved the way for a dominant Bayern Munich with an average of 4.8 shots in a game. 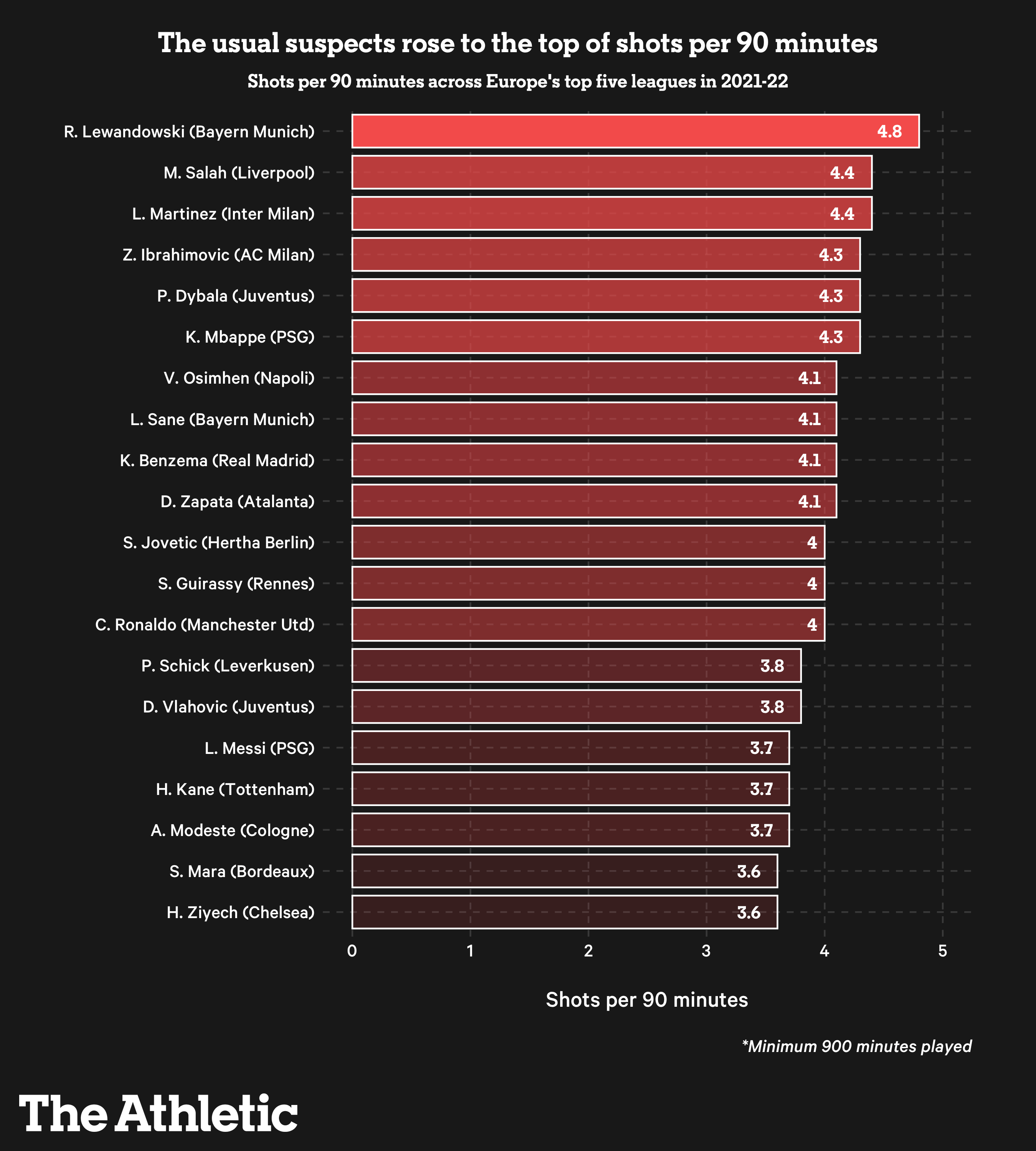 Adjusting player shots by 100 hits mixes the pack up nicely. Lewandowski is still near the top, but the top 20 is filled more with diehard No.9s whose role is to shoot frequently with the keys they have.

Here Anthony Modeste came top for Cologne, with 14 shots per 100 touches, showing his propensity to score – 20 Bundesliga goals earned him a move to Borussia Dortmund in the summer. 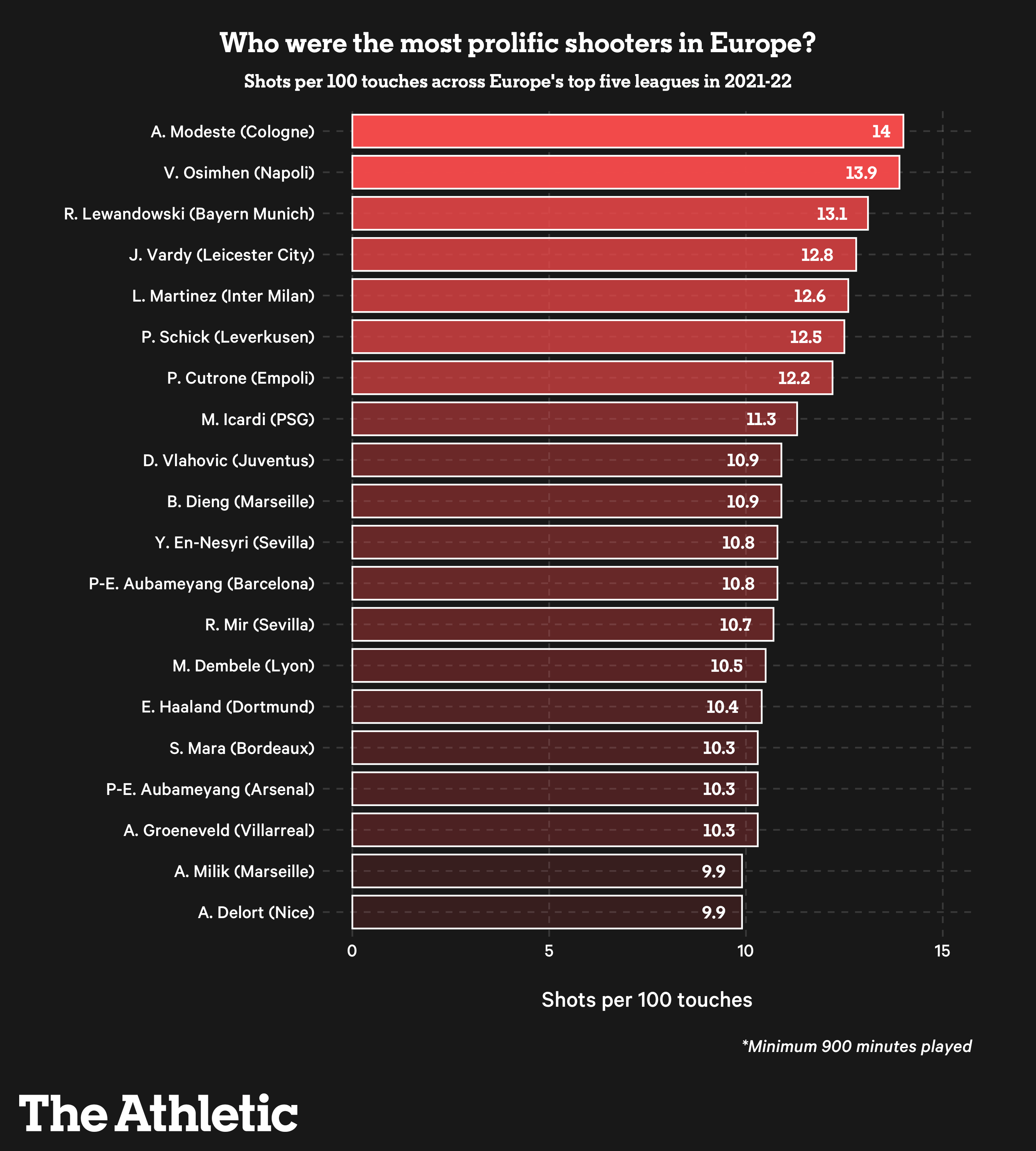 As a full-fledged member of the non-contact All-Stars, a name at the top of the list fits Altman’s example perfectly.

“With Jamie Vardy at Leicester, his team didn’t have many minutes on the ball. Yet when they did they were incredibly efficient. Vardy didn’t take many shots per 90 minutes, but he took a lot of shots per minute in possession.

There is no right or wrong number of touches an attacker should havebut having a standardized measure for all players highlights their tendency to perform a certain action when given an equal chance to do so.

As for Europe’s prolific passers, Marco Verratti, Toni Kroos and Joshua Kimmich are just six players to average over 100 touches per game last season. Even after adjusting every 90 minutes, these players are likely to eclipse their peers in other actions such as progressive passes, simply due to their higher overall involvement. 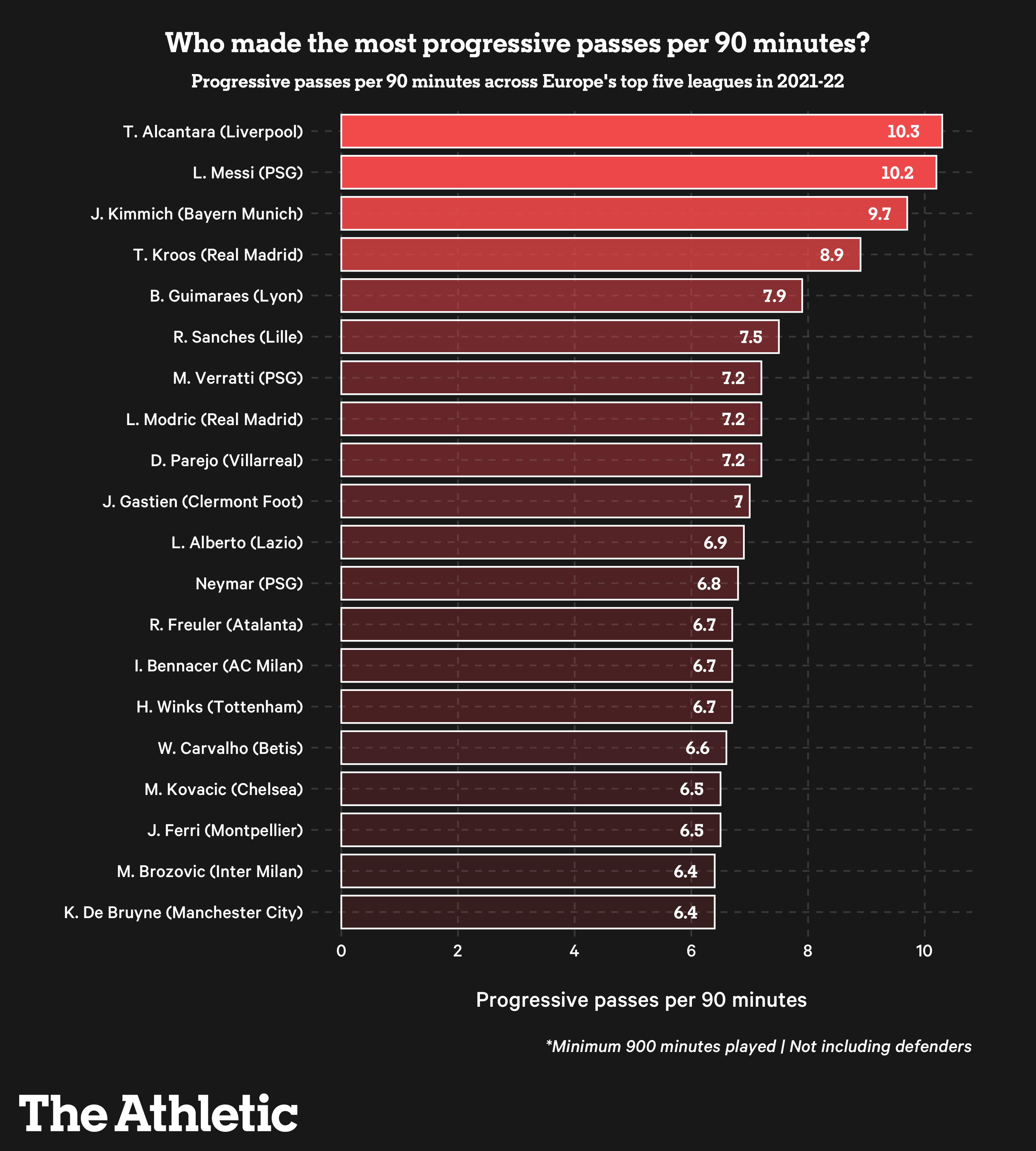 Adjust by 100 touches and Verratti and Kroos drop out of the top 20. That doesn’t mean they aren’t proficient progressive passers, just that such moves aren’t attempted as frequently as the “per 90” comparison suggests.

Also note some Lionel Messi shows how often he still tries to advance the ball towards the opposition’s goal. 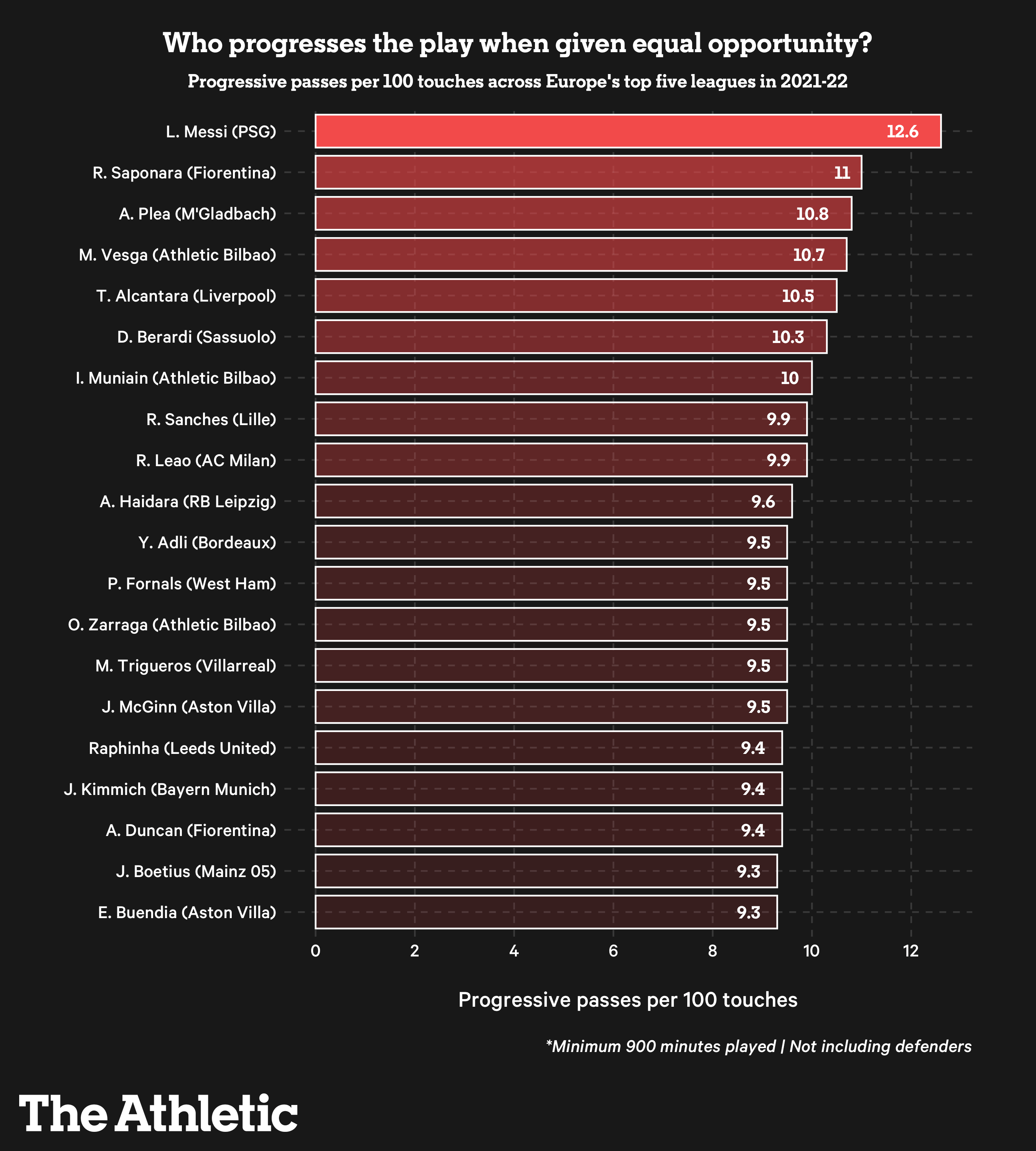 Midfielders such as Iker Muniain (Athletic Bilbao), Amadou Haidara (RB Leipzig) and John McGinn (Aston Villa) are rising through the ranks, highlighting their greater tendency to play the ball forward when the odds are even.

Neither better nor worse, but again a stylistic indication of what a player is looking to do more or less of when he has the ball.

Looking through 100 keys isn’t the only alternative method.

The same way as John Muller adjusted the metric for each player in AthleticismAnalysis of the “player roles” ofwe can look at the share of a player’s actions compared to the whole team when he is on the field.

This method is useful for showing a player’s degree of influence. For example, focusing only on the Premier League, we can look at the share of players’ team passes in the penalty area when they are on the pitch.

Rather than leaning towards high possession teams, we’re seeing some interesting results in player accountability.

Crystal Palace’s Michael Olise tops the list, collecting almost 25% of the team’s open play passes in the box when he is on the pitch. Context should be applied here – 14 of his 26 Premier League appearances were on the bench last season, meaning an injection of attacking threat was likely his mission when he was on the pitch. 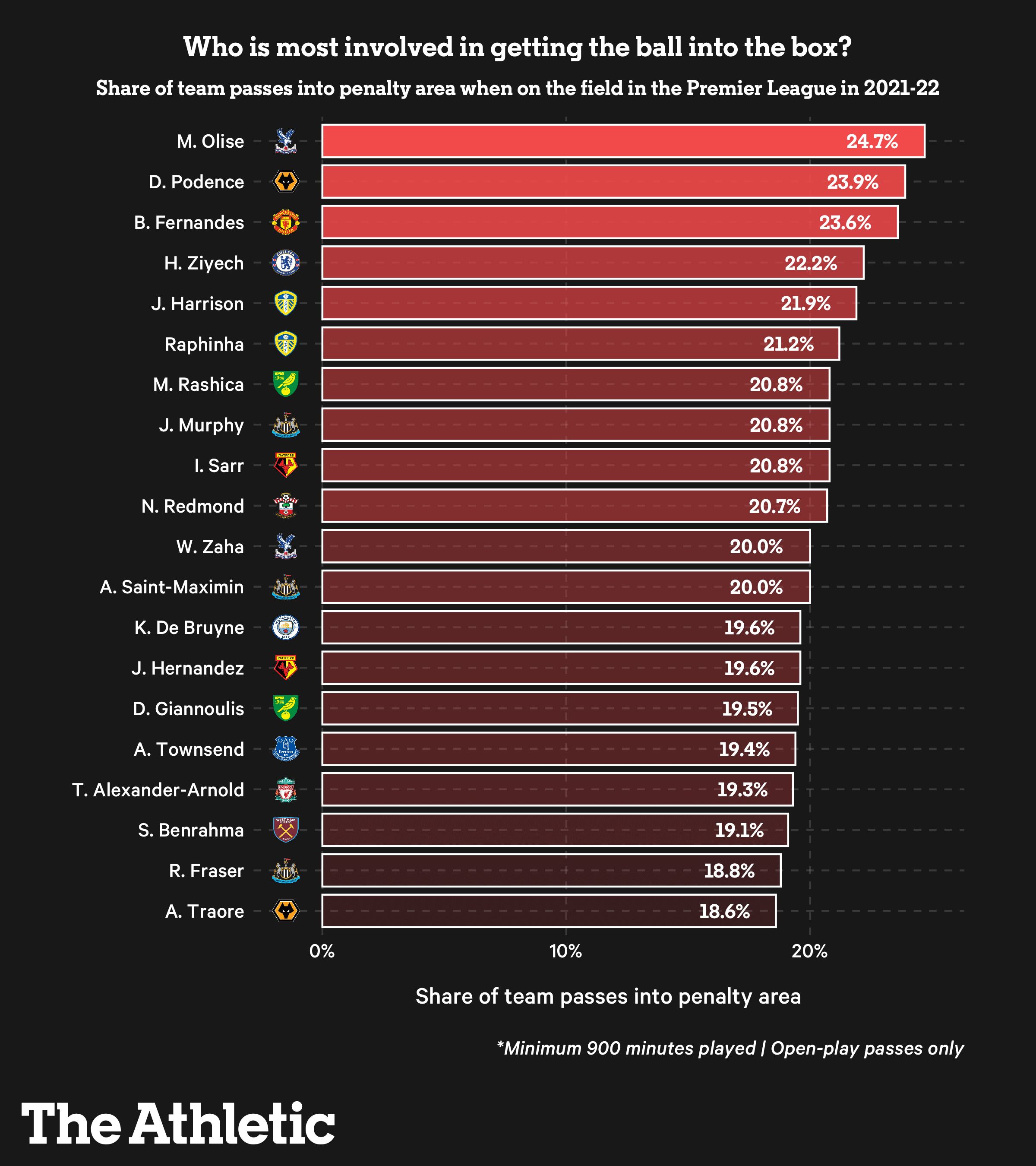 Elsewhere, you can find out the players’ responsibilities for their respective teams, with Manchester United’s Bruno Fernandes (24%), Newcastle’s Allan Saint-Maximin (20%), Manchester City’s Kevin De Bruyne (20%) and Liverpool. Trent Alexander-Arnold (19%) all among the expected contenders for their team’s share of creative responsibility in advancing the ball through dangerous areas.

Basically, the tactical role a player is asked to fill can heavily influence their stat output – and this can change between seasons – but data surrounded by a little more context is much more useful in understanding what a player is really doing on the pitch.

This thought experiment is not a new consideration in football analysis. There are far more complex metrics, models and algorithms in this space, but at the simplest level of analysis, should this be the new normal in how we interpret football data?