Every week, Athleticism asks the same 12 questions to a different racing driver. Up next: Martin Truex Jr. of Joe Gibbs Racing, who recently announced he will return in 2023 for an 18th NASCAR Cup Series season.

1. What do you think of people reclining their seats on planes?

When you get on a plane and settle into your seat, don’t you all feel like lying down? I think it doesn’t say the seats are made to recline, so you should be able to recline them. If you have a problem with that, you probably shouldn’t be on that fucking plane in the first place. I’m lying in my seat, I’ll just tell you, and I don’t care if the person in front of me tilts theirs.

You don’t wait to put it back?

I don’t do a lot of commercial flights, but they tell you when your seat is supposed to be upright. So until that rule applies, my seat is back.

2. How often are you recognized at the grocery store?

I don’t often go to the grocery store. But certainly not that often.

You are not recognized much in public?

It depends on where I am, of course. But in general, no. I keep a pretty low profile.

Now Dale Jr. mentioned this and I think Sherry (Pollex, his longtime partner) chimed in on your very short text responses. You’re just a one-word guy. Why?

I do not know. It’s like that. (Laughs) I’m answering the question directly and not adding a bunch of words that don’t make sense. I guess I don’t like wasting words, how is it?

So if someone asks a yes or no question, they will get a word?

I’ll be like, “Yeah.” You don’t have to wonder why. (Laughs) Unless they ask why. For example, “I want to do this and that” or “I don’t want to do this or that”. I just like to keep things simple. Don’t complicate things.

4. What’s the best way to get out of a conversation with someone who won’t stop talking?

I’ll usually stand there and wait for them to stop talking. That’s how I am. I don’t like being rude or making people feel uncomfortable in that way. So I’d probably be somewhere in space thinking about something else and thinking, “OK, are they ever going to stop?” (Laughs)

As you mentioned, I don’t talk much. I am not a man of a million words. I’m just going to stare into space, thinking about where I’m going to fish tomorrow. And be very nice. And then I hope they stop soon enough.

Just hang out till they stop?

At some point, you’re going to do it if it’s that long, right? But I would certainly never just be rude and walk away or say “I’m done” or anything like that. I don’t have it in me.


If you ever sit in front of this man on a commercial flight, congratulations – you can recline your seat guilt-free for the entire trip. If you sit behind him, however… be careful. (Jim Dedmon / USA Today)

5. If you could only choose one form of social media to use and delete all the others, which would you choose?

I guess I already did.

Yeah, I don’t see you tweeting much anymore.

I like Instagram because I follow a lot of people I don’t see or really know – a lot of hunters and anglers. And I like the pictures. I don’t like to talk a lot and I don’t like the nonsense that comes up on other platforms. You know, people fight and act like idiots and have no consequences for the things they say to you and stuff. So I just like to be a bit behind the scenes and follow the things I want to see, see the things I want to see. So for me, it’s been Instagram.

6. What advice would you give to someone who is struggling to recover from a mistake they made?

The problem with errors is that they are always in the past tense. You have to learn from them, you have to move on and figure out how to fix it or what kind of situation it is. It could be a lot of different things, but be a better person, do something to never do it again or learn from it. It’s always hard to forget things that happened in the past, things that bother you, but you have to overcome them. You need to move on and try to fix it.

It’s part of life, isn’t it? All the different areas of life, there’s a lot of things you’ll go through and you’ll be like, “Why did I do that? Or, “Why did this happen?” Or, “That was stupid. I can’t do that again. So you just have to put that behind you and try to be better.

7. This next question is a wild card where I mix it up for each person. Obviously you’ve made your recent decision on how you want to come back next year, but you’ve been thinking about it for a while. So, is there a factor that made you think, “Man, this is what I would miss so much that I can’t give up on this yet?”

The competition side and just working with my team. My favorite part of this sport throughout my career has been the behind-the-scenes part – working on the race car. Even as a kid growing up in the race, the funniest part was always, “OK, you didn’t win Saturday night. You have all week to figure out how to get better. What are you going to do?” And I love that aspect. I love working with the team, the camaraderie, just pulling in the same direction.

In NASCAR, drivers make the headlines. Drivers win, drivers lose. But it takes so much more than that. And I really, really appreciate that part. That’s the only thing: I would miss the guys, I would miss working with them. I would miss edgy Mondays, like, “How are we going to get better? What are we doing? How are we going to get there?” And then when you get there, the satisfaction of that is the best part of the sport and the thing that has kept me going. It really attracted me in the first place and now it has kept me for so many years.

8. If someone blatantly destroys you to win a race, would you interrupt their celebration?

Well, it’s happened to me before and I didn’t. So I’ll say no, I won’t interrupt their celebration.

I was going to ask if you would try to get them back, but it’s not really…

Recovering them is not directly something you may even know is happening. (Smiles) It doesn’t have to be a (Matt) Kenseth, just smash them against the wall and destroy them. It could be other things. Maybe just make them run harder, make things harder, things that aren’t obvious.

9. In your opinion, what movie have you seen the most times in the past year?

I don’t know if I’ve seen it more than once. And I haven’t seen that many in general. I don’t watch TV a lot.

Are you at the store or doing something outside? This is how I imagine you. 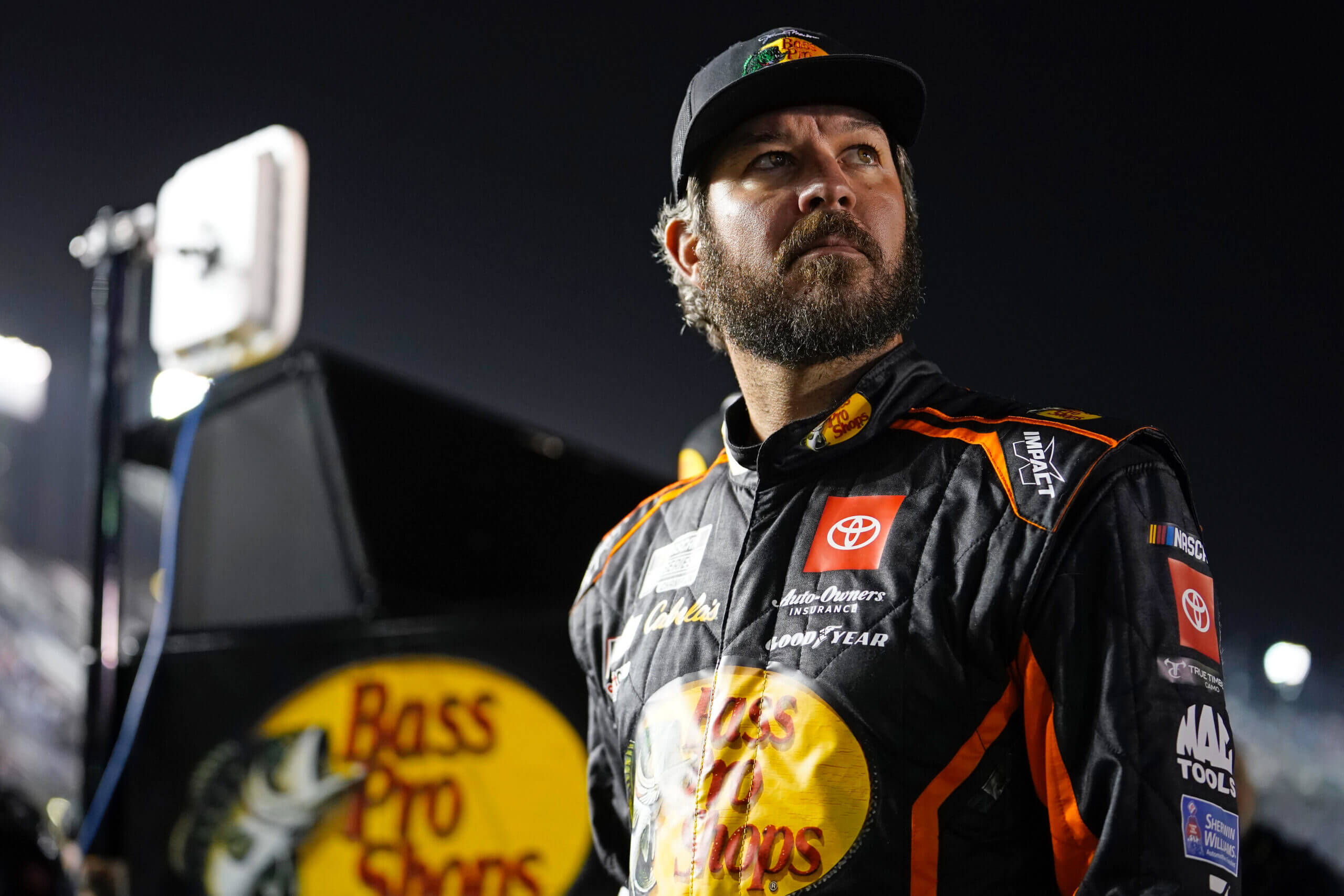 10. When you think of NASCAR five years from now, what are you most optimistic about and what worries you the most?

The most optimistic thing is precisely the solidity of the teams. How many teams we have, we have new owners coming in. It seems the way NASCAR does things, they try to help the teams more because the sponsors are still not in the right place. So team health is something that’s really, really positive.

What worries me is the competition part, like races and racetracks. Are we going to end up where everything looks like Daytona and Talladega where everything is so close? And then the other side is just the aggressiveness of the pilots because there’s so much at stake. A lot of kids coming in feel like they have a tiny bit of an opportunity, and if they don’t take it, they will be ridiculed. And we see a lot of big moves that you know won’t work out and end in crashes. It’s happened a lot this year.

This part worries me. At least when I got there you had a bunch of guys come over and they were there for a while. And then you had one or two. And in the last two years, we’ve had a bunch of new guys come in. They’ll stick around, won’t they? Lots of great pilots. They’ll learn from their mistakes and they’ll get to where they’re veterans and they’ll teach new guys – but there won’t be five or eight new guys at once. So I guess I’m not really worried about anything, to be honest. I think he’s in the right place and in the right hands and going in the right direction.

11. A magical genie appears and gives you the option to go back to the beginning of your racing career and start all over again, but you keep all the knowledge and experience you have now. So do you go back and start over with it all in your back pocket or do you just stay where you are?

I would take it all day. Without a doubt. Growing difficulties are difficult and there is a lot to go through and a lot to learn. I would definitely take it all and go back and be much better off, especially the first two years.

12. Every week, I ask a driver to ask me a question for the next person. Last week it was Chase Elliott and his question for you is, “What are you going to spend the most time doing when you’re done running?”

Fishing. It was pretty easy, right? It’s a layup.

When you say fishing, is it like every day? Do you think you will be on the water every day?

It could be every day for a few days or a week, then not for another week when I don’t go anymore. But it depends where I am and what’s going on. I fish a lot now. I have a few places I go where I live (and) vacation spots where I have friends with boats etc. But there are a lot of must-see places I want to go when I retire. And those are some of the first fun things I’ll do.

I like. And it’s part of my way of life and what I like to do. I like to go catch a fish for dinner and come home and cook it. Many people don’t know this part. So I take advantage of it. I’ll do a lot of fishing, a lot of hunting, and a lot of whatever else I want to do. (Laughs)

So the next interview I do is with Daniel Suarez. Do you have a question I can ask him?

I’m never good at this questioning thing. My question for him would be: “How does it feel to win your first Cup race? But more importantly, how has it changed him? Or did it change him?