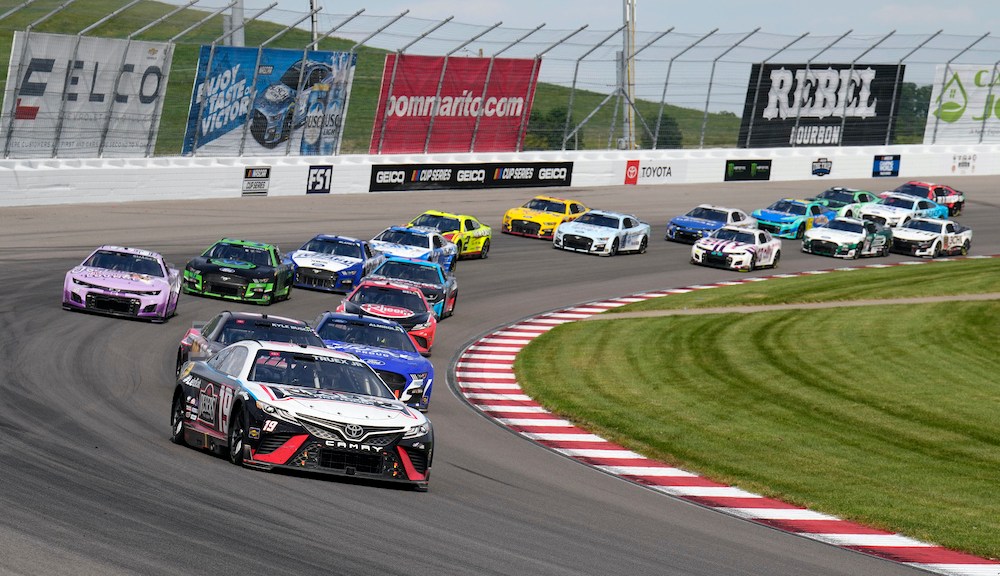 If first impressions are indeed everything, St. Louis gave a memorable hell of hosting the NASCAR Cup Series in town for the first time.

Sunday’s race was the icing on the cake for a region that opened its arms to the NASCAR community from the start of the weekend until well after the checkered flag. The race was sold out, providing fantastic images for the best of times, but the World Wide Technology Raceway was packed every time the gates were opened, with fans milling about and enjoying all that was on offer.

And they were a passionate bunch, making their presence known both in their reactions in the stands and their presence. Fans flocked to the track for both races, field access and the accompanying music festival. There were artists playing all weekend, including St. Louis-born Nelly.

There were dedicated NASCAR fans who had waited years to see a Cup Series race on their track, and some seemed like rookies. Or maybe those who have access to get closer to cars for the first time.

Coming back from the garage on Saturday afternoon, a fan could be heard saying, “That’s so cool.”

Curtis Francois and his group worked for years to prepare for a Cup Series race and it showed. They did their best to make it more than just a race weekend. The field of 36 took a shot on the straight before hitting the track for the first time on Friday, and Richard Petty had the honors of making the opening laps.

Drivers and crews seemed completely comfortable with the amenities. The indoor field has been redesigned to accommodate more fans and offer many activities.

“I think what you’re looking at for St. Louis, what we’ve done here this weekend is a huge success for the city, our sport and the fans,” race winner Joey Logano said. “The race was good. It was a good deed until the end. Fans were on their feet coming for the green-white checkerboard. Every one of them was here. I think they’re all still here in [Turns] 3 or 4 enjoying a gig with someone.

“So I think the track did a terrific job of promoting the event. You see the billboards on the highways. They were ready and they really promoted it. They did a fantastic job, and I think that’s something we shouldn’t overlook because they promoted it properly. They had good races. They cared about the race too.

Blaney was among those surprised by the quality of the track. Motorsport pictures

“Then they had good entertainment when there was no racing. They have concerts. I think they had Nelly here last night. They had some cool stuff. It’s a fun weekend for the fans to be here. Home run on every department, if you ask me.

Logano and Kyle Busch went into overtime to win the inaugural race, it was a perfect end to the weekend. Sunday’s 300-mile race was entertaining both in the shenanigans on the track between Ross Chastain’s many haters and in the performance of the Next Gen car.

WWTR is a mostly flat race track, and the car hasn’t performed well on flat tracks this year: think Phoenix and Martinsville. Martin Truex Jr. predicted it would be a race of restarts and pit stops, and Ryan Blaney said there would be no overtaking. Luckily, both seemed to be wrong.\

“Honestly the race was better than I thought,” said fourth-placed Blaney. “(The track) widened a bit, so I thought that was okay. I feel like there are some things we can work on coming back to if we come back – maybe that a different tire or more drop, I think, would be strong. I thought it was a really good first time for the Cup Series here, but there are always things to learn.

Dirty air was always a problem, but NASCAR has something to work on. The track wasn’t the problem, but the car still needs some tweaking, mostly to eliminate shifting and make the drivers pay for their mistakes.

NASCAR’s philosophy with racetracks seems to be to go where the fans are. Fans were in St. Louis and showed they would support the race. They’ve been doing it for years with a standalone Camping World Truck Series race, and maybe it shouldn’t have been surprising that they did it with the Cup Series.

WWTR and its fans should be rewarded by staying on the Cup Series schedule as long as the attendance is there. Don’t change what works. Obviously, the St. Louis race is working – the market and fan support is there, which means a Cup Series race should be, too.

“I thought the track had widened nicely, but we’re changing gears, and I know I stressed the gear changes, but it makes it really, really difficult,” said Denny Hamlin. “It looks like we had some good assists for the win, which is really good. We had to work on the tires and improve them so that they wear better. Obviously, if you don’t fit in your last fuel window, the tires have to wear out a bit more.

“But overall I think the track has widened nicely. I thought this whole town – I think this whole track did an absolutely phenomenal job of setting up a race. It’s first class; everything is first class. I really believe we have a future here.