IndyCar’s silly season continues to move at a rapid pace as Mid-Ohio approaches. It’s been over a month since my last update, so let’s take a full tour of everything that happened and what’s happening right now.

Over the past few weeks, my private conversations have turned to the shrinking of options in the paddock, with the #7 Chevy at Arrow McLaren SP currently driven by Felix Rosenqvist serving as a prime example of how the fantastic possibilities exploding on social networks can fade. shortly.

Firstly, it was Chip Ganassi Racing’s Alex Palou who was contacted by AMSP in May with a view to taking over the No.7 next season and taking part in McLaren F1 testing in a bid to secure a great license. An effort to untie the defending IndyCar champion from his contract failed, and with his obligation to CGR intact, the Palou-AMSP game went nowhere.

The next push to replace Rosenqvist in No. 7 was to woo CGR foundation six-time champion Scott Dixon with offers of a racing seat and a long-term leadership role – with long-term financial security. term – to help AMSP President Taylor Kiel. lead the team once he retires.

Like Palou, Dixon is under contract beyond 2022, so there will be no immediate move from either driver, but they may be inclined to leave CGR once their contracts are complete.

With both of these known at Road America’s last race, plus the recent confirmation of the F1 drivers’ pursuit of McLaren next year and the signing of Rosenqvist for an extension with no clarity on whether he will remain in the No. 7 Chevy or being deployed in McLaren’s new Formula E program, we’re back to where we were a few months ago.

As July dawns, McLaren has still not decided who will partner next year with Pato O’Ward and Alexander Rossi, Rosenqvist is in limbo – but has new security in which team he will drive – and the AMSP’s pursuits of marquee pilots, who have been on the move all year, have largely stalled due to timing.

And with AMSP making repeat runs at Chip Ganassi Racing drivers, it’s worth wondering whether Ganassi will work to extend Palou, Dixon and championship leader Marcus Ericsson, who is in the first of a new two-year contract. , in the weeks and months to come. . As McLaren Racing CEO Zak Brown recently told RACER, “As I fully expect, whether it’s Penske or Andretti, or Ferrari or Mercedes in Formula 1, they’re looking for the best talent possible. And that’s why you need to make sure that when you have superstars, you keep them out of the market for as long as you can.

Dixon is the most fascinating driver in this regard. Signed through 2023, the 41-year-old has no plans to retire any time soon as he chases a seventh IndyCar title and a second Indy 500 win. But there will come a time when the best of his generation – now in his 21st season with Ganassi – will decide to step out of the cockpit, and when he does, as McLaren has shown before, Dixon’s vast driving experience and competitive wisdom will be a coveted asset.

Most of the time, it’s not too difficult to score Dixon’s signature. But which team will be able to get one when the Kiwi’s contract is up? Michael Levitt/Motorsport Pictures

I can’t say if Ganassi has thought of or put together a post-drive offer for Dixon, but if he hasn’t, I’d have to believe McLaren’s rumored equity incentive package in the team, and a lengthy contract to remove any worries about revenue stability could tempt CGR to act with its own long-term offer. Losing Dixon — CGR’s competitive engine — to a rival is the last thing they can afford.

Another driver to consider in a different light is Ericsson. Yes, he’s blessed with longtime backing that brings a budget for the new Indy 500 winner to offer, but the days when Ericsson was considered a paycheck first and a driver second is over. As well as leading the league for CGR, he has become the team’s best performing and most consistent player this year. As opponents start looking for top drivers to fill vacancies when their drivers leave or retire at the end of 2023, Ericsson could be among the top targets unless CGR steps in.

Going back to the #7 Chevy, the discussions I’ve had with a lot of smart people have all come to the same place with the belief that keeping Rosenqvist in the car for another year is the smartest move. He’s soaring right now, works incredibly well with O’Ward and is loved by O’Ward, and he’s immensely popular within the AMSP.

With the AMSP starting to give long-established Big 3 teams headaches, the idea of ​​adding two new drivers at once is a surefire way to risk all the gains they’ve made. And with a group of star riders hitting the market through 2024, the idea of ​​waiting until next summer to land a big catch has a lot of merit. Will O’Ward and Rossi quickly become friends and go wild together to win the race? Or will things get icy? It’s hard to say, which is why maintaining the chemistry and consistency that O’Ward and Rosenqvist bring – while incorporating a strong talent and unique personality like Rossi – makes the most sense. short term.

As for Meyer Shank Racing, Helio Castroneves’ full-time return to IndyCar hasn’t been the smoothest of rides as the Indy 500 legend sits a distant 17th in the championship standings – one spot behind RLL rookie Christian Lundgaard – but I recently heard the Brazilian is set to return for another full season. It is a significant change.

MSR is known to have spoken with some of this year’s top free agents as those drivers made stops throughout the paddock to see what might be available for next year. Castroneves is also keen to continue in the #06 Honda, so it would be surprising if an extension wasn’t signed.

Continuing with the theme of closing the doors, there’s still a chance we could see Rinus VeeKay head to AMSP, but it looks like the smart call for driver Ed Carpenter Racing might be to sign a one-year deal. year to stay and continue to seek the best long-term fit in the paddock. Looking ahead to 2024, is there a vacant seat at Penske, Ganassi, Andretti or MSR that could make the young Dutchman a title contender? For a driver who wants to be the top dog in a top team, there simply aren’t any obvious options that fall into that category among the seats left to be filled next season. Staying put makes a lot of sense with how this year’s silly season game went.

Team Andretti are ready with their next line-up as AJ Foyt Racing’s Kyle Kirkwood heads in to replace Rossi. Rossi and Grosjean, I’m told, aren’t exactly best friends, so from a chemistry standpoint, I wonder if the Florida surfer could bring something new and more positive to the foursome. 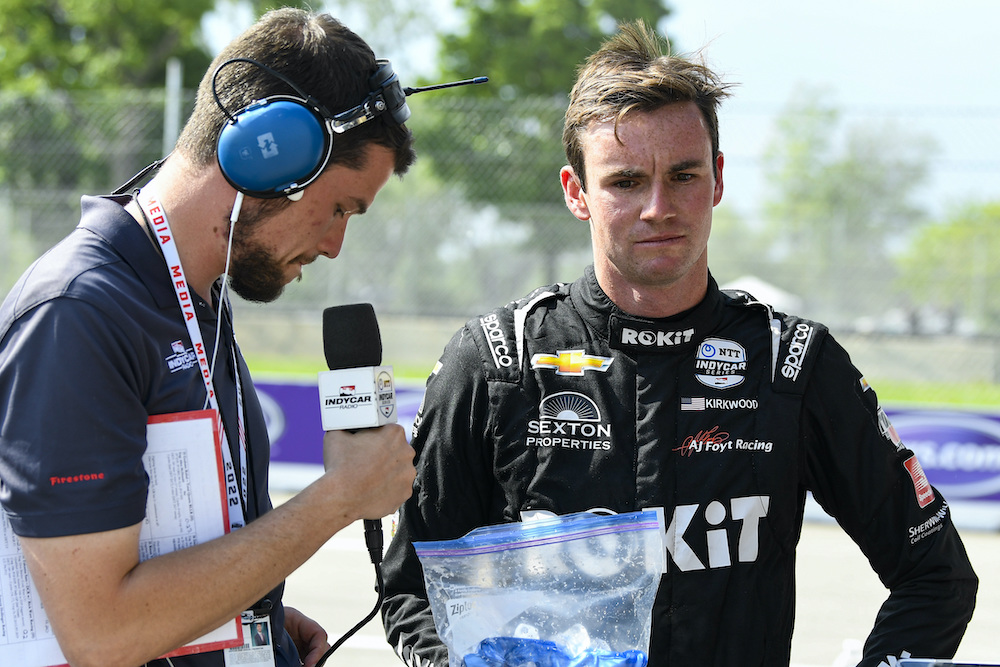 Will Kirkwood be able to rebalance the chemistry within Andretti when he arrives for next season? Motorsport footage

The Foyts are losing the best young talent they’ve had in all time, and while I’d love to see them sign another young star to take over from Kirkwood, the ongoing payment issues with No. 14’s main sponsor could force the team looking for a paid driver. As Ericsson showed CGR, a driver who can bring sponsorship isn’t necessarily a bad thing, and with that in mind, 22-year-old Indy Lights talent Benjamin Pedersen who has backers ready to move to IndyCar could end up on pole position to land in the car.

Up until now, every driver and team scenario has involved teams staying at their current entry counts or expanding. With Foyt and his #11 Chevy, we have our first opportunity for contraction. Dalton Kellett is likely to return in the No. 4 Chevy with his K-Line family sponsorship, and while it’s hard to say who the No. 14’s main sponsor will be, this car means everything to the team and the funding will be found.

It’s the No. 11 that is likely to fall off the grid – as early as Toronto in a few weeks – unless the immediate sponsorship issues are resolved, and from there worry about whether the car will return in 2023 seems like something best saved for another day.

Chip Ganassi told us this week that his team will be “status quo” next year with the return of all four drivers. The main thing to answer, and it’s way too early to get anything definitive, is whether Tony Kanaan will be back as CGR’s fifth driver for the Indy 500. Given the impact that he had on the team’s competitiveness at Speedway, Kanaan is a must-have for the 500.

Dale Coyne Racing has an option on Takuma Sato which his team owner has said he expects to exercise and Sato’s rookie teammate David Malukas is on the first of a multi-year contract with DCR, so for the first time in quite a while, the team should have consistency from year to year with its drivers. As we wrote last week, an expanded relationship with HMD Motorsports to place another car on the grid – for HMD’s Indy Lights Championship leader Linus Lundqvist – is also a strong possibility.

Of the remaining full-time teams, Ed Carpenter Racing’s VeeKay was covered, leaving Conor Daly to explore quickly. He has a new multi-year contract with ECR, and despite the daily pessimism around cryptocurrency stocks, he recently told me that all is well and stable with his crypto-based sponsors.

Juncos Hollinger Racing wants to keep Callum Ilott and Ilott recently told RACER he intends to stay. Although JHR hasn’t made an official statement on its plans, the team is known to have a few drivers on its radar to test in the coming months, all with the aim of adding a second full season car to the roster. sides of Ilott’s #77 Chevy. . Provided this driver is as good as the Brit and a race engineer of comparable talent can be found, this team could be heading for great things.

No changes are expected for the Rahal Letterman Lanigan Racing trio of Graham Rahal, Christian Lundgaard and Jack Harvey, although former RLL driver Santino Ferrucci is known to have a strong interest in returning to the team. It’s unclear if they’re receptive to the idea, but Connecticut’s little spark plug wants to come back and wants to help turn things around for the team.

Finally, as The Captain told me a few days ago, Penske’s trio of Josef Newgarden, Will Power and Scott McLaughlin will be back in their respective Chevys.

For a final pass, Andretti, Coyne, Ganassi, MSR, RLL and Penske are set, provided any new contracts or extensions are signed. AJFR, AMSP, ECR and JHR have vacancies or new cars to fill, or drivers to assign or re-sign.

Yes, the silly season is coming to an end, but there is still a lot to solve before the championship is over.