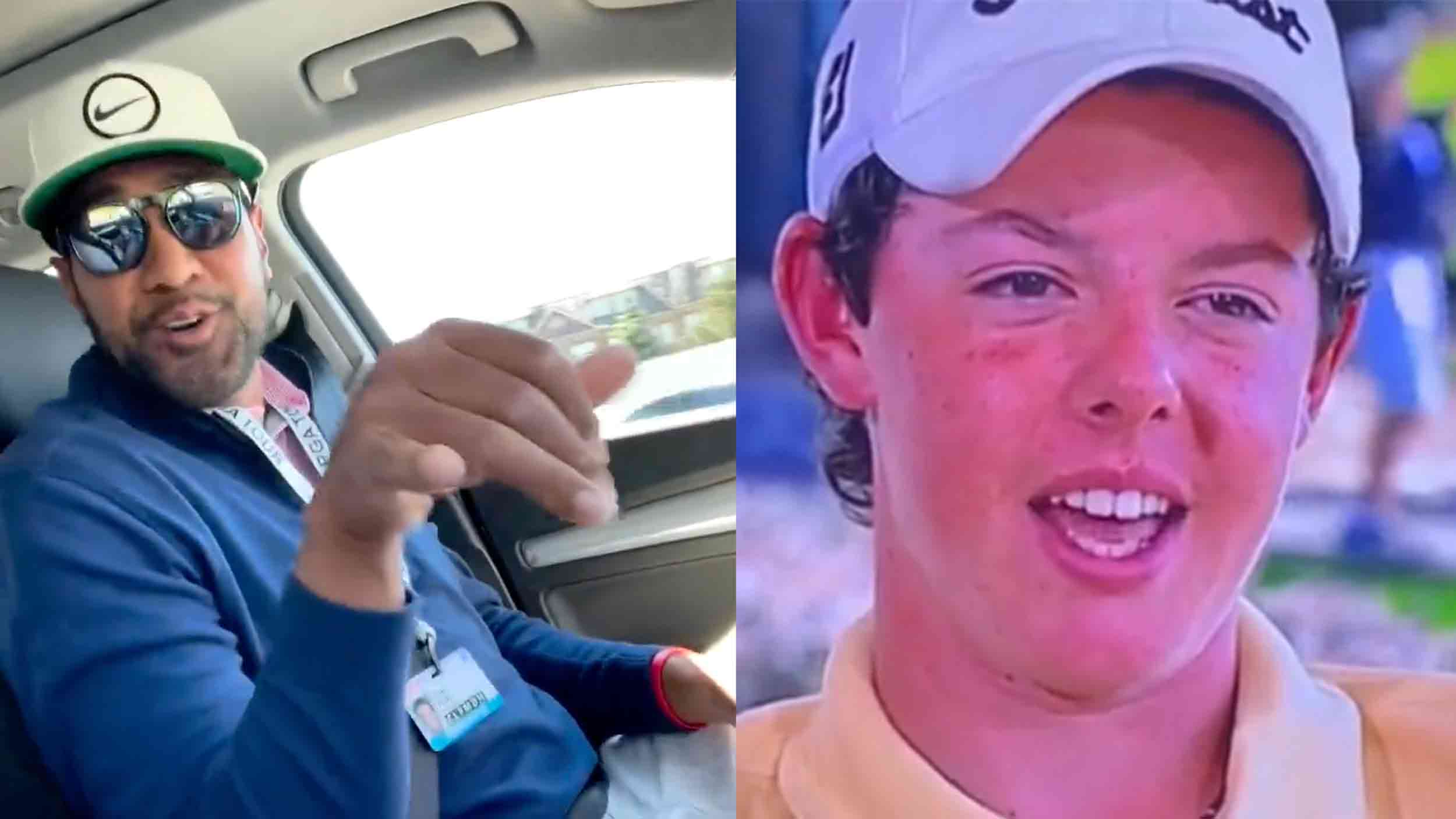 I know I said this last week, but I really say it this week. It has been, by far, the most eventful week of golf ever. And perhaps the most random! Between Dennis Quaid narrating a video of LIV Golf, Rory McIlroy getting a little mean-spirited on the show and a handful of players resigning from the PGA Tour, a plot arrived. If I had to guide you everything what happened last week, this column may never end. So instead, I’m going to tell you what stood out to me the most.

Do you ever bribe yourself to do something? Like, do you think you can have a pint of ice cream if you fold your laundry, or you can buy those new shoes you ogled if you skip a Zoom meeting without dozing? That’s exactly what Nelly Korda did last week, but on a much bigger scale.

Korda released an extremely high definition swing video on the lineup last week. There are a lot of swings you wouldn’t want to see clearly, but that’s not the case for the world number 2.

Anyway, a lot of people must have messaged Korda about her Instagram story because she followed this.

It turns out that the greatest golfers in the world also make deals with themselves. Nelly made her first start in 119 days at the US Women’s Open, so her goal of making the cut makes sense. But again, it’s Nelly Korda, so of course she finished tied for eighth at Southern Pines. Enjoy the phone, Nelly. We all look forward to your future articles.

If there’s one thing you should know about me, it’s that I love The Parent Trap. I dressed up as Annie (or maybe Hallie? They’re identical, so who could really tell) for Halloween when I was a kid, and it’s the most movie I’ve seen in 27 years on earth. So I get very excited when something related to Parent-Trap comes up.

So it’s safe to say my jaw dropped to the ground when I learned that Dennis Quaid, who was quite possibly my first crush, narrated this hype video for LIV Golf.

I mean, Nick Parker really put his heart and soul into this thing.

I covered the Sims-Koepka wedding in last week’s Rogers Report, but that was before the professional photos were shared! So, just in case you missed them on your own social feeds, here they are.

Ok folks, if you’re not already following Finau Fresh on Instagram, here’s your sign to get started. The account offers a hilarious look at the Finau family (Tony, his wife Alayna, and their five awesome kids), and it’s the best. Whether it’s a video of Tony in loud scripts, family hanging out, or Tony rapping, as we have below, you’ll never be disappointed with their content.

I was already a fan of Finau, but this video took my appreciation for the second-placed solo finalist at the RBC Canadian Open to a new level. He hits every lyric perfectly and has so much fun. This was posted after Round 3 on Saturday, but the caption on Instagram said this is what the journeys to the course look like for Finaus. Talk about getting into a positive mindset before you warm up!

Rory McIlroy won his 21st PGA Tour title on Sunday. More importantly, he threw some shade at Greg Norman and the Saudi-backed LIV golf league in his post-round interview.

I’m not going to lie, I didn’t think McIlroy had that in him! He took a shot at Greg Norman here, who has “only” 20 PGA Tour wins. This is the kind of shadow that I dream to throw at my enemies (in theory. I don’t think I have any…yet). Some would say Rory should have focused on his win and kept it positive, to which I say, what fun is that? To joke. There’s so much going on in men’s golf these days. What’s an extra layer of drama?

Justin Thomas even got in on the joke when he took to Twitter after his game.

Speaking of Finau and McIlroy, they played in the final group on Sunday with Justin Thomas. Turns out they go way back.

How cute? My junior golf buddies and I did not eventually turn pro. I think most of them work in real estate now.

McIlroy played in a junior league in Utah one summer and actually stayed with the Finau family. And now they’re both Nike guys in the big leagues! It’s not a friendship I’ve heard much about, but it makes perfect sense. Two good guys! Hopefully we can see them in other final groups in the future.

And an honorable mention goes to this stunning throwback photo.

A WAG caddies in the ShopRITE LPGA Classic

Mel and Carly Reid tied the knot two months ago, which means the honeymoon phase is over and it’s time for Carly to start wrapping up (read: Carly bravely decided to jump on the sack in New Jersey and did something that very, very few of us would do). Luckily for us, she shared some notes after each round, and they’re great.

It reminds me of the first (and last) time I caddyed, at Northeast Amateur 2018.

My family hosted Cole Madey from UCLA that week, and his caddy was away on the last day, so I found myself on the sack. I would give myself a solid C- that day. I left clubs behind on several holes and really brought nothing but good vibes. I was paid in Lululemon gift card so it was worth it (for me. Maybe not for Madey).

Anyway, great job, Carly. Caddying is NOT an easy gig.

If you’re unfamiliar with the recent Grayson Murray/Kevin Na drama, let me fill you in. It all started with this back and forth in January.

I’ll let you open this thread if you want to see more, but then things quieted down for a few months, until Na resigned from the PGA Tour last week, which Murray commented on.

Murray qualified for the US Open on Golf’s Longest Day last week, and guess what? Murray and Na are side by side in alphabetical order on the roster, which means their lockers are side by side at Brookline.

I’m a little nervous how this is going to turn out. I’m also very jealous of the locker room attendants who will see this all unfold. Will they be nice to each other in real life? Will a fight break out at the Country Club? Who’s to say? Good luck guys!

My other news for you is about Mr. Adam Scott and the message he shared on his Instagram Story on Sunday.

First of all, it’s great that the players have laundry service this week. I might try to slip mine in too, especially since they won’t be busy washing Scott’s beige sweater. This thing stays on him 24/7.

Also, I had forgotten that the USGA gets super creative with locker room signs and name tags during US Open week, so I’m excited for what else they have in store.

The Curtis Cup took place last weekend, and while the play was obviously amazing, so was that awesome moment between some fans and the members of Team USA.

Rose Zhang and Rachel Heck are Stanford golf stars and top amateurs! So cool to see them hanging out with fans.

Then we have a golf lesson in the parking lot, which could be golf at its purest. What could be better than working on your swing while waiting for your prescription to be ready?

But seriously, I love it so much. You can always improve and these guys are determined to do just that!

Then we have Gus the Great Dane who spends his days at the Country Club. What a life!

I watched Brookline prepare for the US Open through Gus’ perspective on this account. Be sure to check it out for awesome dog x golf content.

And last but not least, I have my #1 recommendation for anyone heading to the US Open this week. As a Boston College graduate, I know the area very well and I’m thrilled to share with you the good news that this is the best ice cream spot in the world.

White Mountain Creamery is one of my favorite places on earth, and it’s just down the road from Brookline. Worth stopping by if you’re at the US Open, and you’re welcome to come early.