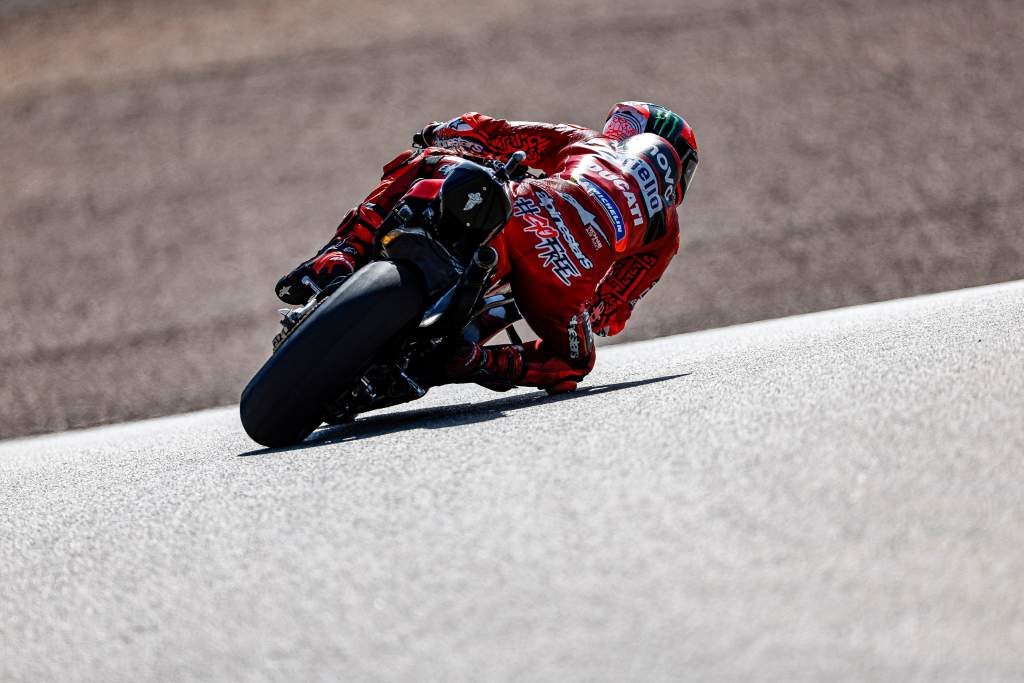 Francesco Bagnaia led Aleix Espargaro in the third MotoGP test of the Sachsenring weekend, with the line-up for Q1 decided.

> Crashes for Bezzecchi, Nakagami and Marquez

Bagnaia’s benchmark from Friday remained the Sachsenring lap record until the half hour mark of EL3, when Espargaro went 0.005s faster on a new soft tyre.

The Aprilia man was on course to go even faster next time around, and indeed improved further, but only by an extra 0.006 seconds – being caught by Yamaha’s Franco Morbidelli in the final sector, with Espargaro unleashed and the incident placed under investigation.

This meant that it was Bagnaia who would instead record the first-ever Sachsenring sub-1m20 lap a few minutes later, and immediately improve it to record a 1m19.765s.

No less than four riders – including three Ducati men – joined Bagnaia in the sub-1m20 margin, but Bagnaia’s time proved sufficient to secure him first place in FP3.

An improving Espargaro finally came closest to dethroning him, within six hundredths of a second, followed by the Ducati trio of Jack Miller, Johann Zarco and Jorge Martin.

Fabio Quartararo’s fastest lap was to be marred by yellow flags for an Alex Marquez (LCR Honda) crash at Turn 9, but he instead suffered greater drama, blowing off his helmet visor and forcing him in the pits after a number of failures. tries to solve the problem on the right track.

We have a technical problem 💥@ FabioQ20His visor broke but he doesn’t have time to go back to the pits 👀 #GermanGP 🇩🇪 pic.twitter.com/mPNad9wjO8

Despite this, he rather comfortably booked a place in Q2 in sixth, the only Yamaha rider to do so, 0.060s behind the only Suzuki rider to do so – Joan Mir.

Mir’s teammate Alex Rins, who is nursing a broken wrist and still undecided on Friday whether he would see out at the weekend, finished 17th.

The remaining places in Q2 were taken by Takaaki Nakagami (LCR Honda), Maverick Vinales (Aprilia) and Luca Marini (VR46 Ducati). Marini was only 15th in the session but had a better time on Friday to fall back on, which meant Miguel Oliveira (KTM) – 10th at FP3 – missed out instead.

Big crash in the last moments 💥

Nakagami is a victim of turn 1 but could still make Q2 🙌#GermanGP 🇩🇪 pic.twitter.com/TDUNKl0ob5

Nakagami had a late crash at Turn 1, causing quick crashes for both LCR riders, while VR46 Ducati rookie Marco Bezzecchi had a big crash out of Turn 12 earlier.

He is fine and is back on his feet 🙌 #GermanGP 🇩🇪 pic.twitter.com/KdJdI8mg9p